A new species of large prehistoric croc that roamed south-east Queensland's waterways millions of years ago has been documented by University of Queensland researchers.

PhD candidate Jorgo Ristevski, from UQ's School of Biological Sciences, led the team that named the species Gunggamarandu maunala after analysing a partial skull unearthed in the Darling Downs in the nineteenth century.

"This is one of the largest crocs to have ever inhabited Australia," Mr Ristevski said.

"At the moment it's difficult to estimate the exact overall size of Gunggamarandu since all we have is the back of the skull - but it was big.

"We estimate the skull would have been at least 80 centimetres long, and based on comparisons with living crocs, this indicates a total body length of around seven metres.

"This suggests Gunggamarandu maunala was on par with the largest Indo-Pacific crocs - a Crocodylus porosus) - recorded.

"We also had the skull CT-scanned, and from that we were able to digitally reconstruct the brain cavity, which helped us unravel additional details about its anatomy.

"The exact age of the fossil is uncertain, but it's probably between two and five million years old."

Gunggamarandu belonged to a group of crocodylians called tomistomines or 'false gharials'.

"Today, there's only one living species of tomistomine, Tomistoma schlegelii, which is restricted to the Malay Peninsula and parts of Indonesia," Mr Ristevski said.

"With the exception of Antarctica, Australia was the only other continent without fossil evidence of tomistomines.

"But with the discovery of Gunggamarandu we can add Australia to the 'once inhabited by tomistomines' list."

Despite its discovery, the fossil skull of Gunggamarandu maunala remained a scientific mystery for more than a century.

The specimen piqued the interest of then-young graduate student Dr Steve Salisbury in the 1990s, but a formal study was not done until Mr Ristevski began his examination.

"I knew it was unusual, and potentially very significant, but I didn't have the time to study it in any detail," Dr Salisbury said.

"The name of the new species honours the First Nations peoples of the Darling Downs area, incorporating words from the languages of the Barunggam and Waka Waka nations.

"The latter is in reference to the large, hole-like openings located on top of the animal's skull that served as a place for muscle attachment."

The research has been published in the open access journal Nature Scientific Reports (DOI: 10.1002/spp2.1296). 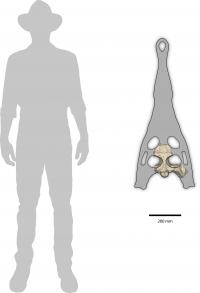