This release is available in Italian, German, Spanish, French, Chinese, and Japanese.

Two recent international studies are poised to change the way scientists view the crucial relationship between Earth's climate and the carbon cycle. These reports explore the global photosynthesis and respiration rates—the planet's deep "breaths" of carbon dioxide, in and out—and researchers say that the new findings will be used to update and improve upon traditional models that couple together climate and carbon.

The two reports will be published online by the journal Science at the Science Express Web site at 6 p.m., US ET, Monday, 5 July. Science is published by AAAS, the nonprofit science society.

Christian Beer from the Max Planck Institute for Biogeochemistry in Jena, Germany, along with colleagues from 10 other countries around the world, first take a look at Earth's Gross Primary Production, or GPP, which represents the total amount of carbon dioxide that terrestrial plants breathe in through photosynthesis each year. With a novel combination of observations and modeling, they estimate the total amount of carbon that the world's plant life inhales annually is 123 billion metric tons.

Then, Miguel Mahecha, also from the Max Planck Institute for Biogeochemistry, and another international team of researchers settle a long-standing debate over the effects of short-term variations in air temperature on ecosystem respiration, or the Earth's exhalation of carbon dioxide back into the atmosphere. They show that the sensitivity of ecosystem respiration to short-term variations in temperature is similar around the world. The researchers also suggest that factors other than temperature, such as the slow, ongoing transformations of carbon in the soil and water availability, appear to play crucial roles in long-term ecosystem carbon balances.

Together, these findings shed more light on the global cycle of carbon into and out of the atmosphere and how those processes are coupled with Earth's ever-changing climate. The researchers analyzed vast amounts of climate and carbon data from around the world, and they say their results should help to improve the validity of predictive models and help resolve how climate change might affect the carbon cycle—and our world—in the future.

"An understanding of the factors that control the GPP of various terrestrial ecosystems is important because we humans make use of many ecosystem services, such as wood, fiber, and food," said Beer. "Additionally, such an understanding is important in the context of climate change as a consequence of carbon dioxide emissions from burning fossil fuels because vegetation greatly modulates the land-atmosphere exchanges of greenhouse gases, water, and carbon dioxide…"

In their report, Beer and his colleagues pooled large amounts of data from FLUXNET, an international initiative established more than 10 years ago to monitor exchanges of carbon dioxide between Earth's ecosystems and the atmosphere, with remote sensing and climate data from around the world to calculate the spatial distribution of mean annual GPP between 1998 and 2006.

The researchers highlight the fact that uptake of carbon dioxide is most pronounced in the planet's tropical forests, which are responsible for a full 34 percent of the inhalation of carbon dioxide from the atmosphere. Savannas then account for 26 percent of the global uptake, although the researchers note that savannas also occupy about twice as much surface area as tropical forests.

Precipitation also plays a significant role in determining the gross global carbon dioxide uptake, the researchers found. They suggest that rainfall has a significant influence on the amount of carbon that plants utilize for photosynthesis on more than 40 percent of vegetated lands, a discovery that stresses the importance of water availability for food security. According to the study, climate models often show great variation, and some of them overestimate the influence of rainfall on global carbon dioxide uptake.

"We reached a milestone with this paper by using plenty of data from FLUXNET in addition to remote sensing and climate reanalysis," Beer said. "With our estimation of global GPP, we can do two things—compare our results with [Earth system] process models and further analyze the correlation between GPP and climate."

In the second study, Mahecha and his team of researchers also relied on the global collaboration within the FLUXNET network during their investigation of ecosystems' sensitivity to air temperature. Compiling and analyzing data from 60 different FLUXNET sites, these researchers found that the respiratory sensitivity to temperature of the world's ecosystems, commonly referred to as Q10, is actually quite set in stone—and that the Q10 value is independent of the average local temperature and of the specific ecosystem conditions.

For years, experts have debated the effect that air temperature has on global respiration, or the collective metabolic processes of organisms that return carbon dioxide to the atmosphere from Earth's surface. Most empirical studies suggest that such ecosystem respiration around the world is highly sensitive to increasing temperatures, while the majority of predictive models suggest otherwise. Scientists say that global air temperatures may rise due to the presence of heat-trapping carbon dioxide from the burning of fossil fuels. But, this new result suggests that the temperature sensitivity of the natural exhalation of carbon dioxide from ecosystems has been overestimated and should be reevaluated.

This latest study, in settling the controversy, suggests that previous field studies failed to disentangle processes acting on different time-scales. Mahecha and his team considered the processes of the 60 different ecosystems on the exact same time-scale in order to nail the global mean Q10 down to a value of 1.4. Their new, standard value for various ecosystems' sensitivity to air temperature suggests a less pronounced short-term climate-carbon feedback compared to previous estimates.

In the future, these two separate studies should allow for more precise predictions of how Earth's warming climate will affect the exchange of carbon between our ecosystems and the atmosphere—and vice versa. They provide scientists with important tools for better understanding the world's ecosystems and how the human race continues to influence and alter them.

The report by Mahecha et al. was funded by CarboEuropeIP, FAO-GTOS-TCO, iLEAPS, Max Planck Institute for Biogeochemistry, National Science Foundation, University of Tuscia, the U.S. Department of Energy, and grants from the European Research Council, the European Commission project CARBO-Extreme, and the Max Planck Society.

Breath of the Earth: Cycling carbon through terrestrial ecosystems 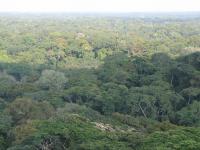