Physicians may soon have a new way to screen patients for Barrett's esophagus, a precancerous condition usually caused by chronic exposure to stomach acid. Researchers at the Wellman Center for Photomedicine at Massachusetts General Hospital (MGH) have developed an imaging system enclosed in a capsule about the size of a multivitamin pill that creates detailed, microscopic images of the esophageal wall. The system has several advantages over traditional endoscopy.

"This system gives us a convenient way to screen for Barrett's that doesn't require patient sedation, a specialized setting and equipment, or a physician who has been trained in endoscopy," says Gary Tearney, MD, PhD, of the Wellman Center and the MGH Pathology Department, corresponding author of the report receiving online publication in Nature Medicine. "By showing the three-dimensional, microscopic structure of the esophageal lining, it reveals much more detail than can be seen with even high-resolution endoscopy."

The system developed by Tearney and his colleagues involves a capsule containing optical frequency domain imaging (OFDI) technology – a rapidly rotating laser tip emitting a beam of near-infrared light and sensors that record light reflected back from the esophageal lining. The capsule is attached to a string-like tether that connects to the imaging console and allows a physician or other health professional to control the system. After the capsule is swallowed by a patient, it is carried down the esophagus by normal contraction of the surrounding muscles. When the capsule reaches the entrance to the stomach, it can be pulled back up by the tether. OFDI images are taken throughout the capsule's transit down and up the esophagus.

The researchers tested the system in 13 unsedated participants – six known to have Barrett's esophagus and seven healthy volunteers. The physicians operating the system were able to image the entire esophagus in less than a minute, and a procedure involving four passes – two down the esophagus and two up – could be completed in around six minutes. A typical endoscopic examination requires that the patient stay in the endoscopy unit for approximately 90 minutes. The detailed microscopic images produced by the OFDI system revealed subsurface structures not easily seen with endoscopy and clearly distinguished the cellular changes that signify Barrett's esophagus. Study participants who had previously undergone endoscopy indicated they preferred the new procedure.

"The images produced have been some of the best we have seen of the esophagus," says Tearney, a professor of Pathology at Harvard Medical School and an MGH Research Scholar. "We originally were concerned that we might miss a lot of data because of the small size of the capsule; but we were surprised to find that, once the pill has been swallowed, it is firmly 'grasped' by the esophagus, allowing complete microscopic imaging of the entire wall. Other methods we have tried can compress the esophageal lining, making it difficult to obtain accurate, three-dimensional pictures. The capsule device provides additional key diagnostic information by making it possible to see the surface structure in greater detail"

Current recommendations for diagnosis of Barrett's esophagus, which is uncommon in women, call for endoscopic screening of men with chronic, frequent heartburn and other symptoms of gastroesophageal reflux disease. Study co-author Norman Nishioka, MD, Wellman Center and MGH Gastroenterology, notes, "An inexpensive, low-risk device could be used to screen larger groups of patients, with the hope that close surveillance of patients found to have Barrett's could allow us to prevent esophageal cancer or to discover it at an earlier, potentially curable stage. But we need more studies to see if that hope would be fulfilled." 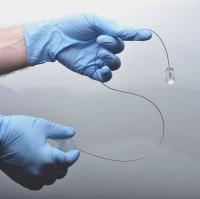