CORVALLIS, Ore. - Flavor differences in whiskey can be discerned based solely on the environment in which the barley used to make the whiskey is grown, a new study co-authored by an Oregon State University researcher found.

This is first scientific study that found the environmental conditions, or terroir, of where the barley is grown impacts the flavor of whiskey, said Dustin Herb, an author of the study and a courtesy faculty member in the Department of Crop and Soil Science at Oregon State University.

"Terroir is increasingly being used to differentiate and market agricultural products, most commonly wine, as consumers grow more interested in the origins of their food," Herb said. "Understanding terroir is something that involves a lot of research, a lot of time and a lot of dedication. Our research shows that environmental conditions in which the barley is grown have a significant impact."

Herb, who is originally from Lebanon, Oregon, and earned his undergraduate and doctoral degrees from Oregon State, is the only American author of the study, which was published in the journal Foods. The other authors are all from Ireland, where the study was conducted.

Herb's doctoral research at Oregon State with Pat Hayes, a barley breeder in the College of Agricultural Sciences, focused on the contributions of barley to beer flavor. Their research found notable differences in the taste of beers malted from barley varieties reputed to have flavor qualities.

That research caught the attention of Waterford Distillery. The Irish distillery reached out to Herb, flew him to Ireland and asked him if he could design a study that would attempt to answer the question of whether terroir exists in whiskey. They dubbed it The Whisky Terroir Project. (Whiskey can be spelled with and without an "e.")

Herb designed a study that involved planting two common commercial varieties of barley in Ireland - Olympus and Laureate - in two distinct environments: Athy, Co. Kildare and Buncloudy, Co. Wexford in 2017 and 2018. Athy is an inland site and Buncloudy is a coastal site. They were selected in part because they have different soil types and different temperature ranges and rainfall levels during the barley growing season.

The crops of each barley variety at each site in each year were harvested, stored, malted and distilled in a standardized way. Once distilled, the product is called "new make spirit." (It isn't called whiskey until it is matured in a wooden cask for at least three years.)

The researchers used gas chromatography mass spectrometry and the noses of a six-person trained sensory panel to determine which compounds in the barley most contributed to the aroma of the new make spirit.

That analysis, along with further mathematical and statistical analysis, found that the environment in which the barley was grown had a greater contribution to the aroma of the whiskey than the variety of the barley. That was the clear indication of the impact terroir has on the new make spirit.

Furthermore, the sensory analysis found distinct differences in the aroma characteristics of the new make spirit from the barley grown in each location. In Athy, it was more positively associated with sweet, cereal/grainy, feinty/earthy, oily finish, soapy, sour, stale and mouldy sensory attributes and in Bunclody it was more associated with dried fruit and solventy attributes.

"What this does is actually make the farmer and the producer come to the forefront of the product," Herb said. "It gets to the point where we might have more choices and it might provide an opportunity for a smaller brewer or a smaller distiller or a smaller baker to capitalize on their terroir, like we see in the wine industry with a Napa Valley wine, or Willamette Valley wine or a French Bordeaux."

The sensory analysis also found differences in the aromatic profiles between the 2017 and 2018 seasons that were studied.

"This makes us think there might be a vintage aspect to the whiskey like wine, where you buy a 2019 or a 2020 or a 2016," Herb said. "Could the whiskey industry operate in a similar way, where someone is going to seek out a certain vintage of a certain year?"

To answer that question, more research needs to be done, Herb said. That is a project the Whisky Terroir Project plans to tackle: examining flavor changes in the spirits as they mature in casks and to see what happens with the terroir impact.

The team is also scaling up the research to study terroir in commercial-scale barley fields over a five-year period.

In addition to Herb, who also works full-time as a plant breeder at Albany, Oregon-based OreGro, which develops turf and forage products, other authors of the paper are: Maria Kyraleou and Kieran Kilcawley of the Teagasc Food Research Park; Grace O'Reilly and Neil Conway of Waterford Distillery; and Tom Bryan of Boormalt.

The research was funded by Enterprise Ireland Commercialization Fund in collaboration with Waterford Distillery. 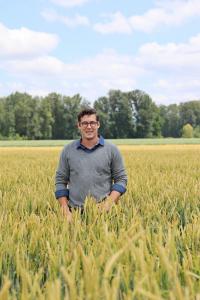