WOODS HOLE, Mass. -- It's not spring in New England until the herring are running. From late February to early April, two species of herring --alewife and blueback herring--return from the ocean and swarm the region's ponds and streams, seeking the waters in which they were born.

"[Alewife] come back every year to find areas to reproduce, much like salmon [do] in freshwater ponds," says Ivan Valiela, Distinguished Scientist at the Ecosystems Center at the Marine Biological Laboratory (MBL). The species are "canaries in the coal mines" indicating shifts in the health of the Northeastern coastal environment, he said.

Populations of coastal alewife have been in decline since the 1960s, with a sharp drop in the 2000s, according to a new research paper by Valiela and colleagues. Commercial landings of river herring in 2005 were only about 1 percent of 1958's catch.

The study, led by Rita Monteiro Pierce, examined how urban development of New England coastal watersheds affects the size and health alewife stocks. They found that "the more developed the watershed, the less well off the alewives that were leaving them," says Valiela. "Growth and the condition of the fish [were] impaired by increased urbanization."

The researchers chose nine coastal ponds --six on Cape Cod, Mass., and three in Maine--and sampled alewife born in 2008 as they headed out to sea for the first time. The ponds, all known alewife breeding sites, were part of watersheds with a wide range of urbanization (from 3 to 60 percent urban land use cover).

Johns Pond in Sandwich, Mass., was the most-urbanized area studied. The young alewife sampled there were nearly half as long and up to 10 times lighter than alewife collected in streams coursing through the less urbanized areas.

Monteiro Pierce conducted research at the MBL Ecosystems Center for several years while a doctoral student at the State University of New York College of Environmental Science and Forestry in Syracuse, N.Y. 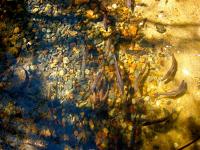