Graphene electrodes could enable higher quality imaging of brain cell activity thanks to new research by a team of engineers and neuroscientists at the University of California San Diego.

The researchers developed a technique, using platinum nanoparticles, to lower the impedance of graphene electrodes by 100 times while keeping them transparent. In tests on transgenic mice, the low-impedance graphene electrodes were able to record and image neuronal activity, such as calcium ion spikes, at both the macroscale and single cell levels. The advance brings graphene electrodes a step closer to being adapted into next-generation brain imaging technologies and various basic neuroscience and medical applications.

Over the past five years, researchers have been exploring graphene electrodes for use in neural implants that can be placed directly on the surface of the brain to record neuronal activity. They have several advantages over the traditional metal electrodes used in today's neural implants. They are thinner and flexible, so they can conform better to brain tissue. They are also transparent, which makes it possible to both record and see the activity of neurons directly beneath the electrodes that would otherwise be blocked by opaque metal materials.

However, graphene electrodes suffer from high impedance, which means electrical current has difficulty flowing through the material. This hinders communication between the brain and recording devices. Readings are noisy as a result. And while there are various techniques to reduce the impedance of graphene, they ruin the material's transparency.

In a new study, an interdisciplinary team of researchers at UC San Diego has developed a technique to engineer graphene electrodes that are both transparent and 100 times lower in impedance. Duygu Kuzum, a professor of electrical and computer engineering at the UC San Diego Jacobs School of Engineering, led the work. Her team developed the low-impedance, transparent graphene electrode arrays. They collaborated with Takaki Komiyama, a professor of neurobiology and neurosciences at the UC San Diego School of Medicine and Division of Biological Sciences, whose team performed brain imaging studies with these electrodes in transgenic mice. The work was published recently in Advanced Functional Materials.

"This technique is the first to overcome graphene's electrochemical impedance problem without sacrificing its transparency," said Kuzum. "By lowering impedance, we can shrink electrode dimensions down to single cell size and record neural activity with single cell resolution."

Another important aspect of this work is that it is the first to uncover the root of graphene's high impedance--a fundamental property called quantum capacitance. It is essentially a limit on how many "open seats" graphene has to store electrons. And with a limited number of seats dispersed throughout the material, electrons have fewer paths to travel through.

Finding a workaround to this limit was key to lowering impedance. Kuzum's team found that by depositing platinum nanoparticles onto graphene's surface, they created an alternate set of paths to channel electron flow.

"We chose platinum because it is a well-established electrode material. It has been used for decades due its low impedance and biocompatibility. And it can be easily deposited onto graphene at low cost," said first author Yichen Lu, an electrical engineering Ph.D. student in Kuzum's lab at UC San Diego.

Researchers also determined an amount of platinum nanoparticles that was just enough to lower impedance while keeping transparency high. With their method, the electrodes retained about 70 percent of their original transparency, which Kuzum notes is still good enough to get high quality readings using optical imaging.

Kuzum's team collaborated with neuroscientists in Komiyama's lab to test their electrodes in transgenic mice. Researchers placed an electrode array on the surface of the cortex. They were able to simultaneously record and image calcium ion activity in the brain.

In their experiments, they recorded the total brain activity from the surface of the cortex. At the same time, researchers used a two-photon microscope to shine laser light through the electrodes and were able to directly image the activity of individual brain cells at 50 and 250 micrometers below the brain surface. By obtaining both recording and imaging data at the same time, researchers were able to identify which brain cells were responsible for the total brain activity.

"This work opens up new opportunities to use optical imaging to detect which neurons are the source of the activity that we are measuring. This has not been possible with previous electrodes. Now we have a new technology that enables us to record and image the brain in ways we could not before," said Kuzum.

The team's next steps include making the electrodes smaller and incorporating them into high density electrode arrays.

This work was funded by an Office of Naval Research Young Investigator Award (N00014161253), the National Science Foundation (ECCS-1752241, ECCS-1734940), San Diego Frontiers of Innovation Scholars Program, Kavli Institute for Brain and Mind Innovative Research, and the National Institutes of Health (R01 NS091010A, R01 EY025349, R01 DC014690, U01 NS094342, P30EY022589). This work was performed in part at the San Diego Nanotechnology Infrastructure (SDNI) at UC San Diego, a member of the National Nanotechnology Coordinate Infrastructure, which is supported by the National Science Foundation (grant ECCS-1542148). 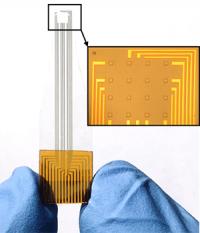