FUNDING has been awarded for a new online resource hub which will document the life and work of controversial theologian Don Cupitt.

The grant, from the British Academy/Leverhulme Trust, will be used by a team of academics from the universities of Chichester and Chester to establish a virtual hub including access to archival material, blog posts, videos, and lecturers.

Former TV presenter Mr Cupitt reached popularity in the 1980s after writing a series of influential books in the areas of theology, philosophy and religion - although he is best known for his divisive BBC series Sea of Faith.

Graeme Smith, a Professor of Public Theology at Chichester, and Professor Elaine Graham, from Chester, were awarded £9,732 for the collaborative project.

Prof Smith said: "The Sea of Faith programme reached notoriety because Don Cupitt, an Anglican priest, argued for a form of non-realist Christianity which accepts that religion is a human construct and that talk of a transcendent God belongs to a past age. After the programme a national Sea of Faith movement was established which still meets today."

The British Academy/Leverhulme Trust small research grant supports primary research in the humanities and social sciences. The awards are provided to cover the cost of the expenses arising from research projects.

Professors Smith and Graham will use the grant to undertake archival work at the Sea of Faith archive at Gladstone's Library in Hawarden, North Wales, which houses all of Don Cupitt's papers. Work will begin on the research project in September this year, with the intention of launching the online research hub in 2022.

Find out more on Don Culpitt and the Sea of Faith archive at Gladstones Library go to http://www.gladstoneslibrary.org/reading-rooms/the-collections/archives/don-cupitt-sea-of-faith.

For more on Professor Graeme Smith his research at the University of Chichester visit http://www.chi.ac.uk/staff/philosophy-theology-and-religion/professor-graeme-smith.

Photo credits - The Master and Fellows of Emmanuel College, Cambridge 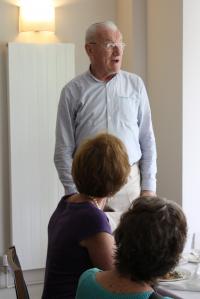