Those delicious flatfishes, like halibut and sole, are also evolutionary puzzles. Their profoundly asymmetrical heads have one of the most unusual body plans among all backboned animals (vertebrates) but the evolution of their bizarre anatomy has long been a mystery. How did flatfishes, with both of their eyes on one side of their head, evolve? So puzzling was the anatomy of flounders and their kin that they were used in early arguments against Darwin and his theory of natural selection. Skeptics wondered how such unusual features could have slowly evolved whilst remaining advantageous for the fishes' survival.

A new fossil discovery described in the latest issue of the Journal of Vertebrate Paleontology by Oxford University researcher Dr Matt Friedman finally solves the mystery. Friedman's fossil fish, named Heteronectes (meaning 'different swimmer'), was found in 50 million year old marine rocks from northern Italy. This study provides the first detailed description of a primitive flatfish, revealing that the migrated eye had not yet crossed to the opposite side of the skull in early members of this group. Heteronectes, with its flattened form, shows the perfect intermediate stage between most fish with eyes on each side of the head and specialized flatfishes where both eyes are on the same side.

"This fossil comes from Bolca in northern Italy, a site that has literally been mined for hundreds of years for its fossil fishes. This remarkable site provides a snapshot of an early coral reef assemblage. Reefs are well known as biodiversity hotspots, so it is perhaps not surprising that Bolca provides us with the first evidence of many modern fish groups," said Friedman. "Our understanding of the relationships of some of these groups is in a state of change with the increasing influx of molecular genetic studies. Fossils have not contributed very much to this debate, but specimens like that of Heteronectes reveal the superb level of detail that can be extracted from extinct species."

Friedman noted that "The specimen itself was discovered—with no identification—in a museum collection in Vienna. It just goes to show that even well-known fossil sites can yield important surprises, and that not all new discoveries take place in the field."

"This is a profound discovery which clearly shows that intermediate fossil forms, which according to certain creationist theories shouldn't exist, are regularly turning up as scientists keep looking for them," says Dr. John Long of the Natural History Museum of LA County, an expert in fossil fishes who was not involved in the study.

OTHER EXPERTS NOT ASSOCIATED WITH THE STUDY

Mystery of the flatfish head solved 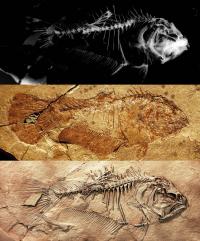 Skeleton of the Primitive Flatfish <i>Heteronectes</i>