Back in 2010, the ideas behind a squid's sticky tendrils and Spiderman's super-strong webbing were combined to create a prototype for the first remote device able to stop vehicles in their tracks: the Safe, Quick, Undercarriage Immobilization Device (SQUID). At the push of a button, spiked arms shot out and entangled in a car's axles—bringing a racing vehicle to a screeching halt.*

The need to stop vehicles remotely was identified by the law enforcement community. With funding from Homeland Security's Science & Technology Directorate, and the expertise of the engineers at Engineering Science Analysis Corporation (ESA), the SQUID prototype was a success. But, the engineers and law enforcement recognized that the SQUID had room for improvement.

"ESA engineers looked at SQUID to identify spiral technologies that could be gleaned from the design. The law enforcement community told us it had to be lighter and smaller," said ESA president Martín Martínez.

Using their smarts, the brainiacs of ESA, their technology and manufacturing partner Pacific Scientific Energetic Materials Company (PSEMC), and S&T, all went back to the Border Patrol agents and police officers operating the security checkpoints asking: what equipment does law enforcement need to operate faster and safer? The answer was simple: take SQUID apart and create two individual devices.

Recently patented and made commercially available, the especially unique Pit-BUL™ and NightHawk™ were the result. They can stop anything from a compact car to a full-size SUV.

Spawned from the original concept of the SQUID, the Pit-Ballistic Undercarriage Lanyard (Pit-BUL™) essentially is a tricked out speed bump. Hidden inside is a set of spikes attached to a net. When deployed, the spikes puncture the tires and the net tangles in the car's axles. Made of easy to combine panels, Pit-BUL™ can be set up for single or double lane coverage.

"If a driver blows through a checkpoint, the agent can press a button and the car's tires are spiked and netted in milliseconds," said Mark Kaczmarek, the SQUID program manager in S&T's Borders and Maritime Security Division. "No high-speed pursuit is needed, and no one's life is put at risk."

Pit-BUL™ can also be equipped with a motion activated sensor for locations needing secondary security. For example, the Pit-BUL™ can be placed near the gate of a facility. If somebody crashes through the gate when no officers are on duty, the sensor activates the Pit-BUL™ to deploy. The alleged gate crasher can be netted and stopped and then apprehended on the spot. PSEMC has performed more than 225 tests that prove Pit-BUL's instantaneous vehicle stopping power. Click here to see it stop a pursuit before it happens: http://www.youtube.com/watch?feature=player_embedded&v=r99VyJtRQIU

Evolved from the arms of the original SQUID, the NightHawk™, was also developed by PSEMC along with its partner, Stop Stick Ltd. The NightHawk™ is a remote-controlled spike strip disguised as a small suitcase. Currently, spike strips are placed by hand in the fleeing driver's path, usually at the last second so as not to impede other traffic. The NightHawk™, placed on the roadside, does not require an officer to stand nearby to deploy the device.

Traditional methods of deploying spike strips by hand in the path of a fleeing driver can put an officer's life in danger, and are not always effective. Martínez explains: "When an officer is radioed that a fleeing vehicle is approaching, they can quickly place NightHawk™ on the side of the road and move a safe distance away. When the target vehicle approaches, before the driver has a chance to react, the officer can remotely trigger the spiked arm to deploy across the street and puncture the vehicle's tires."

Pressing the remote's button a second time retracts the spikes out of the way of oncoming traffic. Within seconds, NightHawk™ can be placed, deployed, and retracted. Click here to see it in action: http://www.youtube.com/watch?feature=player_embedded&v=9h0qKsKaqMQ

"It all comes down to officer safety," said Kaczmarek. "When somebody flees, they put their life, the officers' lives, and nearby pedestrians' or commuters' lives in danger. Pit-BUL™ and NightHawk™ provide law enforcement officers the added safety as well as the ability to halt feeling vehicles from a distance."

"Police departments with a 'no pursuit policy' now have a way to bring cars to a controlled stop," said S&T Deputy Under Secretary Dan Gerstein. "Criminals are caught and police don't have to give chase. These first generation devices are the start of a change in the decades old game of cat and mouse."

* The Small Business Innovation Research (SBIR) Office in the Department of Homeland Security's Science and Technology Directorate (S&T) issued a solicitation for this need and SQUID was the response.

Sometimes, the rubber meets the road when you don't want it to

Funder
US Department of Homeland Security Science and Technology Directorate 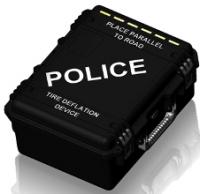