Human industry and ingenuity has done more to diversify and distribute minerals on Earth than any development since the rise of oxygen over 2.2 billion years ago, experts say in a paper published today.

The work bolsters the scientific argument to officially designate a new geological time interval distinguished by the pervasive impact of human activities: the Anthropocene Epoch.

In the paper, published by American Mineralogist, a team led by Robert Hazen of the Carnegie Institution for Science identifies for the first time a group of 208 mineral species that originated either principally or exclusively due to human activities. That's almost 4% of the roughly 5,200 minerals officially recognized by the International Mineralogical Association (IMA).

Most of the recognized minerals attributed to human activities originated through mining -- in ore dumps, through the weathering of slag, formed in tunnel walls, mine water or timbers, or through mine fires.

Six were found on the walls of smelters; three formed in a geothermal piping system.

Some minerals formed due to human actions can also occur naturally. Three in that category were discovered on corroded lead artifacts aboard a Tunisian shipwreck, two on bronze artifacts in Egypt, and two on tin artifacts in Canada. Four were discovered at prehistoric sacrificial burning sites in the Austrian mountains.

According to the paper, the first great 'punctuation event' in the history of Earth's mineral diversity occurred more than 2 billion years ago when the increase of oxygen in the atmosphere -- 'the Great Oxidation' -- gave rise to as many as two-thirds of the more than 5,200 mineral species officially recognized today.

Says Dr. Hazen, who co-wrote the paper with Edward Grew of the University of Maine, and Marcus Origlieri and Robert Downs of the University of Arizona: "Mineral evolution has continued throughout Earth's history. It has taken 4.5 billion years for combinations of elements to meet naturally on Earth at a specific location, depth and temperature, and to form into the more than 5,200 minerals officially recognized today. The majority of these have arisen since the Great Oxidation event 2 billion years ago. "

"Within that collection of 5,200 are 208 minerals produced directly or indirectly by human activities, mostly since the mid-1700s, and we believe that others continue to be formed at that same relatively blazing pace. To imagine 250 years relative to 2 billion years, that's the difference between the blink of an eye (one third of a second) and one month."

"Simply put, we live in an era of unparalleled inorganic compound diversification," says Dr. Hazen. "Indeed, if the Great Oxidation eons ago was a 'punctuation event' in Earth's history, the rapid and extensive geological impact of the Anthropocene is an exclamation mark."

A mineral species is defined as a naturally occurring crystalline compound that has a unique combination chemical composition and crystal structure. As of February, 2017, the IMA had approved 5,208 species (see rruff.info/ima for a complete list).

The authors of the recent paper argue that with so many minerals and mineral-like compounds owing their origin to human activities, "a more comprehensive understanding and analysis of the mineralogical nature of the Anthropocene Epoch is warranted."

Humanity has had a major impact on diversity and distribution in the mineral world in three principal ways, according to the paper:

1 a) Manufacturing synthetic "mineral-like" compounds, and b) causing minerals to form as an unintentional byproduct of human activity

a) Directly creating synthetic mineral-like compounds such as YAG (yttrium aluminum garnet) crystals used in lasers, silicon "chips" for semi-conductors, carbide grits for abrasives, and various specialty metals and alloys for magnets, machine parts, and tools. Other examples include bricks, earthenware, porcelain, glass and limestone-based Portland cement -- the world's most common form of cement, used in concrete, mortar, stucco and grout -- a combination of calcium silicates, calcium sulfates, and other compounds

b) Indirectly contributing to the formation of new minerals through mining, with new compounds appearing on mine walls or in mine dumps, for example. Of special interest are minerals found associated with ancient lead-zinc mining localities, including some possibly dating from the Bronze Age, and others from as far back as 300 AD.?

In addition to creating new compounds, human activities such as mining and the transport of stone blocks, rocks, sediments, and minerals from their original location to help build roads, bridges, waterways, monuments, kitchen counters, and other human infrastructure, rivals in scale nature's redistribution such as via glaciers.

Mining operations, meanwhile, have stripped the near-surface environment of ores and fossil fuels, leaving large open pits, tunnel complexes, and, in the case of strip mining, sheared off mountaintops.

Diamonds, rubies, emeralds, sapphires, and a host of semi-precious stones, accompanied by concentrations of gold, silver, and platinum, are found in shops and households in every corner of the globe.

Collections of fine mineral specimens juxtapose mineral species that would not occur naturally in combination. From modest beginner collector sets of more common minerals to the world's greatest museums, these collections, if buried in the stratigraphic record and subsequently unearthed in the distant future, "would reveal unambiguously the passion of humans for the beauty and wonder of the mineral kingdom," the paper says.

Says Dr. Downs: "Given humanity's pervasive influences on the environment, there must be hundreds of as yet unrecognized 'minerals' in old mines, smelters, abandoned buildings, and other sites. Meanwhile, new suites of compounds may now be forming in, for example, solid waste dumps where old batteries, electronics, appliances, and other high-tech discards are exposed to weathering and alteration."

Adds Dr. Origlieri: "In the sediment layers left behind from our age, future mineralogists will find plentiful building materials such as bricks, cinder blocks, and cement, metal alloys such as steel, titanium, and aluminum, along with many lethal radioactive byproducts of the nuclear age. They might also marvel at some beautiful manufactured gemstones, like cubic zirconia, moissanite, synthetic rubies, and many others."

Says Dr. Grew: "These minerals and mineral-like compounds will be preserved in the geological record as a distinctive, globally-distributed horizon of crystalline novelty--a persistent marker that marks our age as different from all that came before."

Calclacite, described by a Belgium-based scientist in 1959, and which originated in an old oak storage cabinet for mineral specimens at the Royal Museum of Natural History, Brussels, is an officially recognized mineral that wouldn't qualify today; in 1998 the IMA decided to disallow any substance "made by Man."

Other recognized anthropogenic minerals in this category include several slag-related minerals as well as a pair from Russia, niobocarbide and tantalcarbide, which some experts believe may have been a hoax -- "a laboratory product ... deliberately passed off as a natural material" in the early 1900s.

Though unlikely to pass scrutiny today, says Dr. Grew, previously recognized minerals such as these, rather than being invalidated, have been allowed to remain in the IMA catalog.

The IMA did agree to recognize a mineral in cases "in which human intervention in the creation of a substance is less direct."

The origin of up to 29 forms of carbon: humanity

Of the 208 human-mediated minerals identified by the Deep Carbon Observatory researchers, 29 contain carbon.

Origins and forms, along with movements and quantities, are four themes of the DCO (deepcarbon.net). Dr. Hazen is the DCO's Executive Director.

Now we know that as many as 29 carbon minerals originated with human activities, of which 14 have no recorded natural occurrences. It is fair, therefore, to consider the 14 as the youngest carbon mineral species. Among the 14, candidates for the very youngest include a dozen minerals related to uranium mines.

The mineral andersonite, for example, is found in the tunnels of certain abandoned uranium mines in the American Southwest. At places along the tunnel walls, sandstone becomes saturated with water that contains elements that form a beautiful crust of yellow, orange and green crystals. Prized for its bright green fluorescent glow under a black light, a good sample of andersonite will fetch up to $500 from a collector.

Another notable carbon-bearing mineral is tinnunculite, determined to be a product of hot gases reacting with the excrement of the Eurasian kestrel (Falco tinnunculus) at a burning coal mine in Kopeisk, Chelyabinsk, Russia. It was subsequently discovered also on Russia's Mt. Rasvumchorr -- an entirely natural occurrence.

Tinnunculite is one of eight new minerals identified as part of the Deep Carbon Observatory's Carbon Mineral Challenge, launched in 2015 to track down an estimated 145 carbon-bearing minerals yet to be formally recognized. The IMA recognized tinnunculite as a mineral in 2015.

Although yet to be confirmed by the International Union of Geological Sciences, there is growing advocacy for formal recognition of the "Anthropocene Epoch," the successor of the Holocene Epoch, which began some 11,500 years ago when the most recent ice age glaciers began to retreat. Epochs are normally separated by significant changes in the rock layers to which they correspond. A 35-member Working Group on the Anthropocene (WGA) recommended formal designation of the epoch Anthropocene to the International Geological Congress on 29 August 2016. It may be several years before a final decision is reached.?

Carnegie Science seeks to encourage discovery and the application of knowledge to the improvement of humankind. carnegiescience.edu

The Deep Carbon Observatory is an international network of nearly 1000 multi-disciplinary scientists committed to investigating the quantities, movements, forms, and origins of carbon in deep Earth. deepcarbon.net 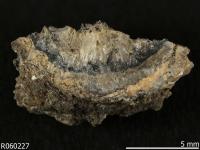