Determining the age of stars has long been a challenge for astronomers. In experiments published in the journal Science, researchers at KU Leuven's Institute for Astronomy show that 'infant' stars can be distinguished from 'adolescent' stars by measuring the acoustic waves they emit.

Stars are often born in clusters, the result of contracting molecular clouds of gas and dust particles. As a star evolves from infant to adolescent, gravitational pull causes it to contract. It gets smaller in size and hotter until the core temperature is sufficient to start nuclear burning of hydrogen. At this point, the star stabilizes and becomes an 'adult'. It stays this way for vast tracts of time.

Determining the age of a young star is far from simple, and knowing which molecular cloud a star comes from gives only a vague idea of its age. But researchers have come up with a way to determine the age of stars by measuring their acoustic vibrations using ultrasound technology similar to that used in the field of medicine.

Acoustic vibrations – sound waves – are produced by radiation pressure inside stars. First author Konstanze Zwintz, a postdoctoral researcher at KU Leuven's Institute for Astronomy, and her colleagues studied the vibrations of 34 stars aged under 10 million years and sized between one and four times the mass of our sun.

"Our data shows that the youngest stars vibrate slower while the stars nearer to adulthood vibrate faster. A star's mass has a major impact on its development: stars with a smaller mass evolve slower. Heavy stars grow faster and age more quickly," says Dr. Zwintz.

While theoretical physicists have posited before that young stars vibrate differently than older stars, Zwintz' study is the first to confirm these predications using concrete data from outer space.

"We now have a model that more precisely measures the age of young stars," says Zwintz. "And we are now also able to subdivide young stars according to their various life phases."

The researchers studied the nebula known commonly as the Christmas Tree Cluster. Their data was obtained from the Canadian MOST satellite and the European CoRoT satellite as well as from ground-based facilities such as the European Southern Observatory (ESO) in Chile. 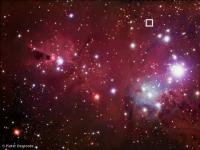 Sound Waves and the Evolution of Stars (2 of 2)