Tropical Cyclone Flamboyan formed in the middle of the South Indian Ocean well to the west of Australia on April 28, 2018. On April 30, Flamboyan's wind speeds had increased to about 81 mph (70 knots) as the tropical cyclone curved toward the south-southwest around the subtropical ridge or elongated area of high pressure.

The GPM core observatory satellite had a good view of the rainfall in Tropical Cyclone Flamboyan when it flew over on April 29, 2018, at 6:26 p.m. EDT (2226 UTC). The satellite's Microwave Imager (GMI) scanned the center of the tropical cyclone and found rain falling there at a rate of over 2.1 inches per hour (53 mm per hour). The satellite's Dual Frequency Precipitation Radar (DPR) missed Flamboyan's center but showed that only light to moderate rainfall was occurring west of the tropical cyclone's center of circulation. GPM is a joint mission between NASA and the Japan Aerospace Exploration Agency, JAXA.

The JTWC predicts that Flamboyan will continue weakening as it encounters increasing vertical wind shear and colder ocean temperatures. Flamboyan is expected to transition to an extra-tropical cyclone by May 3 as it continues moving over open ocean. 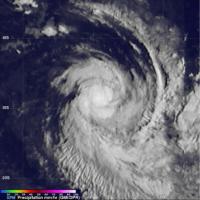