Since 1998, scientists have documented the global loss of amphibians. More than 500 amphibian species have declined in numbers, including 90 that have gone extinct, due to the fungal pathogen Batrachochytrium, commonly known as chytrid.

A new study by researchers from the University of Maryland and Michigan State University shows, for the first time, the ripple effects of amphibian losses on snakes. The results, published in the February 14, 2020, issue of the journal Science, reveal that after chytrid swept through a remote forest in Panama, decimating frog populations, the number of snake species scientists detected declined dramatically, causing the snake community to become more homogenized.

"This study highlights the invisibility of other changes that are occurring as a result of losing amphibians," said Karen Lips, a professor of biology at UMD and a co-author of the study.

Many snakes rely on frogs and frog eggs as part of their diet, so the researchers expected a decline in frogs to impact snake populations. But the slithery reptiles are notoriously cryptic and difficult to study in the wild. How snakes fare following a chytrid epidemic was mostly a matter of conjecture before this study.

"Comparing the after with the before, there was a huge shift in the snake community," Lips said. "The community became more homogeneous. The number of species declined, with many species going down in their occurrence rates, while a few species increased. Body condition of many snakes was also worse right after the frog decline. Many were thinner, and it looked like they were starving."

The researchers cannot say exactly how many snake species declined because snake sightings are rare in general. Some species were only seen once in the pre-chytrid surveys. The researchers could not confirm that a species had disappeared just because it was absent in the post-chytrid surveys. However, over half of the most common snakes (those observed more than five times throughout the total study) had declined in occurrence rates after the frog die-off. Further statistical analysis of the data confirmed a considerable drop in species diversity.

Researchers are confident the changes they observed in the snake community were due to the loss of amphibians and not some other environmental factor. The study area is in a national park with limited impacts from habitat loss, development, pollution or other phenomena that might affect snake populations directly. The remoteness of the El Copé research site and the fact that Lips had been conducting annual surveys there in the years prior to the chytrid epidemic combined to provide a rare window into the rapid changes in an ecosystem following the catastrophic loss of amphibians.

"This work emphasizes the importance of long-term studies to our understanding of the invisible, cascading effects of species extinctions," Lips said. "Everything we watched changed after the frogs declined. We have to know what we are losing, or we run the risk of undermining effective conservation." 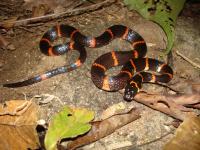