Hydrogen peroxide (H2O2) is used to disinfect minor cuts at home and for oxidative reactions in industrial manufacturing. Now, the pandemic has further fueled demand for this chemical and its antiseptic properties. While affordable at the grocery store, H2O2 is actually difficult and expensive to manufacture at scale.

A team led by the University of Illinois Urbana-Champaign has demonstrated a more efficient and environmentally friendly method to produce H2O2, according to a recent study published in the Journal of the American Chemical Society.

"While the two ingredients--hydrogen and oxygen--are either inexpensive or freely available from the atmosphere, hydrogen peroxide is highly reactive and unstable, which makes it very hard to produce," said first author Tomas Ricciardulli, a graduate student in chemical and biomolecular engineering at UIUC.

Decades ago, researchers proposed a simpler, cheaper, and 'greener' one-step alternative method where a catalyst (palladium-gold nanoparticles) drives the reaction instead. Bonus: the catalyst can be recycled to produce hydrogen peroxide over and over.

"However, hydrogen and oxygen also form water, and this proposed 'direct synthesis' method was known to synthesize 80 percent water and just 20 percent hydrogen peroxide," said lead author David Flaherty, a professor of chemical and biomolecular engineering at UIUC. "Scientists have fiercely debated the arrangement of palladium and gold atoms needed in nanoparticles to increase the selectivity for hydrogen peroxide and why this works."

A higher ratio of gold to palladium atoms in the catalyst produces more H2O2 and less water. The researchers found that a catalyst with a ratio of one palladium to 220 gold atoms generates almost 100 percent hydrogen peroxide, which is about the point of diminishing returns.

Significantly, the catalysts give stable performance over many days of use, continuously achieve these remarkable selectivities to H2O2, and do so using clean water as a solvent, which avoids the problematic and corrosive additives often used for this chemistry.

"We demonstrated how to create a very efficient and selective catalyst," said Flaherty, who is also a Dow Chemical Company Faculty Scholar. "While promising, there are still hurdles to overcome to adopt this method commercially."

The Flaherty research group is pursuing the development of nanoparticle catalysts with new compositions and reactors to enable hybrid chemical-electrochemical methods for this reaction. "Our ultimate goal is to develop feasible technology for distributed production of H2O2 which would open doors for many sustainable alternatives to traditional chemical processes."

The researchers also expect that their activities will reveal other key scientific concepts to electrify chemical manufacturing along the way.

The National Science Foundation and the Energy & Biosciences Institute supported this research, which was conducted in part at the Material Research Laboratory at Illinois and the Synchrotron Radiation Facility at Stanford University. Co-authors also included Coogan Thompson and Ayman M. Karim (Virginia Polytechnic Institute and State University), Sahithi Gorthy and Matthew Neurock (University of Minnesota), and Jason S. Adams (UIUC). 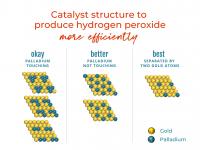