Over the past 10 years, the number of plant species on European mountain tops has increased by five-times more than during the period 1957-66. Data on 302 European peaks covering 145 years shows that the acceleration in the number of mountain-top species is unequivocally linked to global warming.

It is not as lonely at the top as it used to be.

At least not for plants which, due to global warming, are increasingly finding habitats on mountain tops that were formerly reserved for only the toughest and most hardy species.

A large international research team has not only ascertained a considerable increase in the number of plant species on 302 European mountain peaks over the past 150 years; they have also found that this increase is accelerating. Moreover, it is certain that this development is linked to rises in temperatures; changes in precipitation and nitrogen input could not explain the increase.

Therefore, the researchers have demonstrated that the flora is trying to keep pace with the consequences of accelerating anthropogenic impacts on all the Earth's system.

The researchers have only been able to count the plant species that have already responded to the temperature rise and actually have moved upwards. They have not studied the number of species that might be on the way upwards.

However, the results of the new study, which has recently been published in the journal Nature, has not prompted researchers to sound the alarm. Yet.

The study does not show how much the increase in new plant species on summits has displaced existing species that have been growing at these heights for centuries. However, the figures do indicate that this might be happening or will happen in the future.

"Some of the species which have adapted to the cold and rocky conditions on mountain summits will probably disappear in the long term. They have nowhere else to go, and they can't develop rapidly enough to be able to compete with the new arrivals, which are taller and more competitive under warmer climates," explained the main author of the study, Manuel Steinbauer.

Even though it is likely that highly specialised species on mountain summits will be out-competed in the future, this is not absolutely certain. As Manuel Steinbauer puts it:

"The species that move upwards, often come from grassland above the tree line. But they can't survive everywhere on the mountain top, so it's not certain that they will be a threat to all the existing species up there. The local soil conditions and micro-climates also play a role."

Manuel Steinbauer analysed the huge volumes of data while he was working at the Department of Bioscience at Aarhus University, funded by the Carlsberg Foundation. He is now a professor at Friedrich-Alexander University Erlangen-Nuremberg (FAU).

"Even though the existing species on mountain tops are not acutely endangered, the strong acceleration in the effects of global warming on plant communities on the peaks does give cause for concern, as we expect far stronger climate change toward 2100," explained professor and VILLUM Investigator Jens-Christian Svenning from the Department of Bioscience at Aarhus University, who has also been involved in the research project.

The new study was conducted by researchers from 11 European countries, and it could not have been completed anywhere, other than in Europe.

Not because the plants were afraid of heights in the other parts of the world, but because only in Europe is there data on how plant species have moved since the 1870s.

Therefore, the researchers have not only climbed up the mountains many times to register flora meticulously: some of them have also delved into the 150 years of records fastidiously kept by hundreds of botanists around Europe, while they botanised on the same mountains.

"Mountain peaks have the great advantage that they don't move. Therefore, we can be sure that we have investigated precisely in the same places as the botanists of the past. We wouldn't be able to compare the old records from mountainsides or valleys with our own investigations if we couldn't be sure that we had looked at the same places. Of course, at that time there was no GPS," said Dr. Sonja Wipf from the Swiss Federal Institute for Forest, Snow and Landscape Research, WSL in Davos, Switzerland.

Future-proof data from the past

One of the many botanists was the Swiss professor, Josias Braun-Blanquet (1884-1980), who more than a century ago predicted that this type of study may be necessary:

"In order to create a solid foundation for the future, I investigated numerous mountain peaks in detail. [...] On the basis of a comprehensive description of locations, it will not be difficult to verify my species lists, and an increase or decrease of species richness in the future will be possible to detect with high certainty," he wrote (in German) in one of his major works, Die Vegetationsverhältnisse der Schneestufe in den Rätisch-Lepontischen Alpen. Ein Bild des Pflanzenlebens an seinen äußersten Grenzen in 1913.

"We're confident that this old data is of high quality. And to make sure that our own new data is also good, on several of the summits we've had two people climb up to gather data independently of each other," said Sonja Wipf, who has been responsible for collecting much of the new data.

"Braun-Blanquet's foresight has given us food for thought. Without his fascination for understanding the distribution of plant species on mountain peaks, we wouldn't have been able to ascertain that the effects of global warming are accelerating. This is a really good example of the importance of non-targeted research and fascination for understanding complexity in nature," said Associate Professor Signe Normand from the Department of Bioscience at Aarhus University, who also participated in the research project. 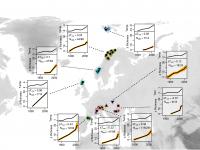