The rate at which new species evolve is limited by competition for ecological niches, report scientists from the University of Chicago in Nature on April 30. The study, which analyzes the evolutionary and genetic relationships between all 461 songbird species that live in the Himalayan mountains, suggests that as ecological niches within an environment are filled, the formation of new species slows or even stops.

To study what controls the process of speciation, Trevor Price, PhD, professor of ecology and evolution at the University of Chicago, Dhananjai Mohan of the Indian Forest service and their colleagues looked at songbirds in the eastern Himalayas, a region which contains the greatest diversity of songbirds in the world. Thought to have originated from a single species around 50 million years ago, the songbird suborder—which includes swallows, warblers, finches and crows—contains more than 5,000 species, occupies a wide range of climates and possesses extreme variations in body mass, shape and feeding adaptations.

The team collected and sequenced DNA from all 461 species of Himalayan songbirds—including ultra-rare species such as the Bugun liocichla. Of these species, 358 breed within a 10,000 square kilometer area, offering the ability to compare the difference between species in the area and those elsewhere in the Himalayas. The team then created a molecular-based phylogenetic tree that detailed the evolutionary relationships between all the species.

Based on genetic information, the researchers discovered that eastern Himalayan songbirds are, on average, separated from each other by six to seven million years—roughly the same amount of time that humans and chimpanzees have been separated.

"Despite the great diversity of environments and ability for species to move between areas, evolution in eastern Himalayas appears to have slowed to a basic halt," Price said. "Other species have formed elsewhere, such as in China and Siberia, but most have been unable to spread into this region."

The researchers attribute this slowing of evolution to the filling of ecological niches, or exploitable habitats or resources for new species to adapt to. The formation of new species is usually thought to involve three steps. First, a species expands across an environmental range. Then a barrier, such as climate change or a geographic event, causes the species to separate into distinct populations. Lastly, the development of reproductive isolation—the inability to interbreed—finalizes the speciation process. This cycle then repeats, creating the breadth of diversity seen in nature.

Price and his colleagues argue that the expansion of a range cannot occur if there are no ecological niches for a species to expand into. Despite the ability of birds to fly and cross geographic barriers, they cannot persist in regions where they are outcompeted by existing species who occupy available niches. In the eastern Himalayas, the researchers found evidence of this in numerous differences in feeding method and body size that appeared early in the evolutionary history of songbirds. Less dramatic ecological differences, such as living at differing elevations, appeared to form later as the initial adaptive radiation slowed.

"Our argument is that niche filling has stopped species from getting big ranges," Price said. "In the eastern Himalayas, it has become harder and harder for new species to get into that system, and we are quite close to the maximum number of species that can be accommodated. There is little room for more species because niches are increasingly occupied."

This model for diversification stands in stark contrast to previous hypotheses, many of which have focused on the slow development of reproductive isolation as the limiting factor.

In addition, the researchers discovered that the greatest diversity of songbird species were located at around a 2,000 meter elevation—a more temperate region compared to the tropical forest below. They plan to further study this phenomenon on return expeditions.

"It's important to realize just how old and how much incredible genetic diversity are in these mountainous forests," Price adds. "All these species managed to deal with warming, glaciation and cooling without changing very much. It's quite amazing to me to think that in the next 100 years a lot of these may be gone, when they managed to get through the last 6 million years."

Competition for ecological niches limits the formation of new species 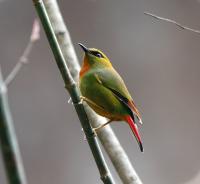