Anyone who's raised a child or a pet will know just how fast and how steady their growth seems to be. You leave for a few days on a work trip and when you come home the child seems to have grown 10cm! That's all well and good for the modern household, but how did dinosaurs grow up? Did they, too, surprise their parents with their non-stop growth?

A new study lead by Dr Kimberley Chapelle of the American Museum of Natural History in New York City and Honorary Research Fellow at the University of the Witwatersrand suggests NOT. At least for one iconic southern African dinosaur species. By looking at the fossil thigh bones under a microscope, researchers can count growth lines, like those of a tree. This allows them to study how much the individuals grew each year. By looking at growth rings in the bones of Massospondylus carinatus, Dr Chapelle was able to show that its growth varied season-to-season, more like a tree than a puppy or a baby human.

"These things were just all over the show" said Chapelle, "one year they might gain 100kg of body weight and the next year they'd only grow by 10kg!"

Massospondylus was a medium sized dinosaur, up to 500kg in body weight, that lived in the Early Jurassic, so 200 million years ago. It fed on plants like ferns. The study suggests that Massospondylus' growth directly responded to its environmental conditions. In a good year with lots of rain and food, the species might race ahead, almost doubling their size. In a bad year where nutrients were scarce, it might hardly grow at all.

Chapelle and her colleagues suggest that such a growth strategy might have helped Massospondylus cope with the harsh environmental conditions following the end-Triassic Mass Extinction 200 million years ago, when more than 50% of species were wiped out.

"Massospondylus was one of the first Southern African dinosaurs named back in 1854 and we are still learning so much from it. It teaches us so much about our past environments and what southern Africa was like 200 million years ago" said Chapelle.

"This study shows the power of big sample sizes," said Jonah Choiniere, Professor at Wits University and co-author of the study, "when we can study a dinosaur from embryo to adult, like Massospondylus, we can begin to understand them as living animals."

"It is exciting to see such varied growth patterns in a dinosaur, showing us there is still so much to learn about these unique creatures!" said Dr Jennifer Botha from the National Museum, Bloemfontein, a co-author on the study. 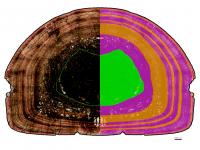 Cross section of a Massospondylus carinatus thigh bone, showing the growth rings, similar to those of a tree