Palaeontologists from St Petersburg University have been the first to study in detail the structure of the brain and blood vessels in the skull of the ankylosaur Bissektipelta archibaldi. It was a herbivorous dinosaur somewhat similar in appearance to a modern armadillo. The first three-dimensional computer reconstruction of a dinosaur endocast made in Russia - a digital cast of its braincase - was of help to the scientists. It made it possible to find out that ankylosaurs, and Bissektipelta in particular, were capable of cooling their brains, had an extremely developed sense of smell, and heard low-frequency sounds. However, their brain was one and a half times smaller than that of modern animals of the same size.

Ankylosaurs appeared on Earth in the middle of the Jurassic - about 160 million years ago - and existed until the end of the dinosaur era, which ended 65 million years ago. These herbivorous animals were somewhat reminiscent of modern turtles or armadillos, were covered with thick armour, and sometimes even had a bony club on the tail. The researchers became interested in the uniquely-preserved remains of ankylosaurs from Uzbekistan. Although these fossils have been known for 20 years, only now have the scientists had a unique opportunity to study the specimens from the inside using cutting-edge methods.

During the study, the palaeontologists examined three fragments of fossil skulls of the ankylosaur Bissektipelta archibaldi. They were found during a series of international expeditions URBAC (Uzbek / Russian / British / American / Canadian Joint Paleontological Expeditions) in the late 1990s and early 2000s at the Dzharakuduk locality in the Central Kyzylkum Desert, Uzbekistan. The scientists emphasise that it is unique in that numerous remains of various representatives of the ancient fauna (about 90-million-year-old) can be found there. These include dinosaurs, pterosaurs, crocodiles, birds, mammals, and other vertebrates.

'This is really one of the richest locations in the world. The fauna of Dzharakuduk has now more than 100 species of ancient vertebrates,' said Pavel Skutschas, Associate Professor at St Petersburg University and an expert in Mesozoic vertebrates. 'Of course, such a diversity of life would not have been found without large-scale field studies. A series of nine URBAC expeditions, undertaken from 1997 to 2006, pooled together the efforts of palaeontologists from many countries in the search for the bones of ancient animals.'

The material that was collected at that time comprises dozens of fragments of skulls and skeletons, and hundreds of thousands of isolated bones. Scientists still use them in their research and say that it is enough for many years to come. At present, the three fragments of fossil ankylosaur braincases from Uzbekistan are stored at the Zoological Institute of the Russian Academy of Sciences. However, they have been temporarily transferred for research to the Department of Vertebrate Zoology at St Petersburg University.

Ankylosaurs lived on our planet for 100 million years

'Thanks to the development of computed tomography (CT) over the past 15-20 years, palaeontologists are able to learn more and more about the dinosaur brain and its structure,' said Ivan Kuzmin, the lead author of the article and a doctoral student at St Petersburg University. 'We decided to re-describe Bissektipelta archibaldi, and we managed to clarify its place on the phylogenetic tree of ankylosaurs. A 3D reconstruction of the endocast of its brain cavity was made using CT. It is important to understand that the digital 'cast' of the braincase is not the brain itself. It is necessary to study it carefully to understand how big the actual brain was, where its parts were, how the vessels and nerves were housed.'

After meticulous work that lasted for three years, the scientists managed to find out that a considerable part of the brain of Bissektipelta archibaldi was occupied by olfactory bulbs - about 60% of the size of the cerebral hemispheres. Bissektipelta could boast of an extremely developed sense of smell, which probably helped it to look for food, relatives of the opposite sex, and to feel the approach of predators in time. It was of vital importance to know about any danger in advance because ankylosaurs had such heavy armor and a clumsy figure. The olfaction of ankylosaurs can even be compared with the olfaction of the famous predator Tyrannosaurus rex. Its olfactory bulbs were even larger, as they occupied about 65-70% of the size of the large hemispheres.

'Another interesting skill of the ankylosaur that we learned about is the ability to cool its brains in the literal sense,' said Ivan Kuzmin. 'The network of veins and arteries in its braincase turned out to be very complicated: they did not go in a single direction, but constantly communicated with each other, like a system of railway tracks. The blood could have flown in different directions and been redistributed, while maintaining the optimal brain temperature of the animal. For example, if the top of an ankylosaur's head became warm, the vessels diverted quickly the warm blood and created a screening effect - as if a dinosaur put a sun hat on. Moreover, the endocranial vasculature of ankylosaurs turned out to be somewhat more like the vessels of present-day lizards than that of the closer extant relatives of dinosaurs - crocodiles or birds.'

Another important conclusion concerns the hearing of Bissektipelta archibaldi. The palaeontologists managed to examine the inner ear of the ancient animal. Its anatomy suggests the frequency of sounds that the ankylosaur could hear. The range turned out to have been from about 300 to 3,000 hertz - present-day crocodiles hear in the same range. These are quite low frequencies that correspond to the relatively large size of ankylosaurs. The larger the present-day animals are, the more low-frequency sounds they make and hear. The palaeontologists suggested that, during evolution, ankylosaurs increased in size, so later forms perceived sounds of even lower frequencies.

'Present-day animal species are characterized by a certain brain-body size relationship,' explained Ivan Kuzmin. 'If you look at dinosaurs, then ankylosaurs and their closest relatives (stegosaurs) were almost outsiders. The mass of their brain turned out to be at least half less than what we would expect, based on a comparison with present-day animals. It was about 26.5 grams for a three-meter Bissektipelta. Its brain size can be compared with two walnuts. Nevertheless, ankylosaurs existed on the planet for 100 million years. They were quite successful in terms of evolution. However, judging by the size of their olfactory bulbs, they sniffed a little faster than they thought.'

At the next stage of their research, the scientists would like to study the fossil braincases of other species of ankylosaurs in order to test the hypotheses expressed in the paper. Additionally, the palaeontologists continue to use computed tomography and are currently working with digital endocranial casts of hadrosaurs - duck-billed dinosaurs whose remains were found at the same locality in Uzbekistan.

In addition to Ivan Kuzmin and Pavel Skutschas, the study engaged: Ivan Petrov, a high school student and a trainee of the Krestovsky Ostrov Ecological and Biological Centre of the St Petersburg City Palace of Youth Creativity; Alexander Averianov, Head of the Laboratory of Theriology of the Zoological Institute of the Russian Academy of Sciences and Professor at St Petersburg University; Elizaveta Boitsova, a graduate of St Petersburg University, who was in charge of the visual part of the work; and Hans-Dieter Sues, a well-known palaeontologist from the National Museum of Natural History of the Smithsonian Institution. Also, Pavel Krasnov, a 3D printing specialist from St Petersburg, helped the researchers print a real-size three-dimensional model of the ankylosaur endocast. The academic paper features the current issue of Biological Communications. It is a renewed Vestnik of St Petersburg University. Series 3, Biology updated three years ago that has been published in Russian since 1946. Today it has been transformed into a journal in English on biology with a particular focus on communicating Russian scientific discoveries to the global academic community. After its renewal, the Editor-in-Chief was Yegor Malashichev, Associate Professor of the Department of Vertebrate Zoology at St Petersburg University, who passed away at the end of 2018. The palaeontologists from St Petersburg University have published this paper in Biological Communications in memory of their friend and talented scientist. 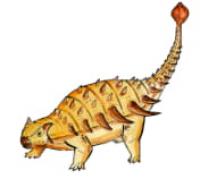