In addition to many findings dating back to the Kingdom of Israel (some 3,000 years ago), remains of a Persian city (2,400 years ago) and a Byzantine town (1,500 years ago) have been exposed at the site. Plans are in place to develop the excavation site as a public archaeology park

Exceptional detective-archaeological work at the first season of archaeological digs at Tel Shikmona, on the southern edge of Israel's city of Haifa, has uncovered the remains of a house dating back to the period of the Kingdom of Israel. The site was excavated about 40 years ago and due to neglect and layers of earth and garbage that piled up over the decades, the historical remains were hidden and little was known about what lay below. Upon re-exposing the structure, archaeologists from the University of Haifa were amazed to find that it had remained well preserved and may in fact be the best-preserved "Four-Room House" dating back to that period known today. "We had seen the structure in the old photographs, and were sorry that such a rarely preserved finding had disappeared due to neglect. We were not even sure that we would be able to find it again. It was practically a miracle that we managed to locate and uncover it and that it is still so well preserved," said Dr. Shay Bar and Dr. Michael Eisenberg of the Zinman Institute of Archaeology at the University of Haifa, who headed the excavation team.

Tel Shikmona, on the southern coast of Haifa, Israel, is located in the Shikmona Nature Reserve and National Park, managed by the Israel Nature and Parks Authority. It was excavated in the 1970s by the late Yosef Algavish on behalf of the Municipality of Haifa, when remains of settlement dating from the late Bronze Age (16th century BCE) to the Muslim occupation of the 7th century CE were found. Over the past decades, however, the archaeological findings at Tel Shikmona have been damaged, construction waste has piled up on the site, and off-road vehicles have ploughed over it. University of Haifa researchers began renewed excavations at the site about 6 months ago, sponsored by the Hecht Foundation in partnership with the Municipality of Haifa, as part of a project intended to transform the area into a public archaeological park. The first season is now culminating and with it a number of fascinating findings.

The old photographs of the 1970s excavations show a house dating back to the 8th-9th centuries BCE, which is the period of the Kingdom of Israel. The structure's design is known as a "four-room house", which was the most common design for houses in that era. It is characterized by the functional division of the structure into four living spaces: three positioned vertically and the fourth horizontally. The other four-room houses exposed to date have been found in relatively bad condition.

Detective work based on the photographs led the researchers to estimate the location of the house – and luck was on their side as they located the structure and also found it highly preserved. According to Dr. Bar and Dr. Eisenberg, this finding presents a rare opportunity to study and become familiar with everyday life in the days of the Kingdom of Israel, and after a process of conservation they hope to include the structure in the public archaeological park.

An additional rare finding exposed during the excavations belongs to the Israelite period (11th-8th centuries BCE - the settlement and Kingdom of Israel): a personal seal showing an inscription in Hebrew or Phoenician. The researchers hope that deciphering this inscription will give the answer to whether the settlement of that time was in fact Israelite or Phoenician.

Other findings from that period give evidence of expansive trade with Middle Eastern neighbors. These include relics imported from Cyprus and the coast of Lebanon, which arrived in fine, delicate vessels of high-quality ceramic. Also exposed were remains of purple-colored pitcher shards. The researchers explain that these are likely to be rare cases of preserved dye, which is reinforced by the fact that hundreds of the purple dye-producing mollusc shells were also found at the site.

Earlier in the season, a long section of the eastern side of the tell was exposed, revealing remains of terraced Byzantine structures (4th-7th centuries CE) that were built on the slope. Inside the houses, a number of destroyed mosaic floors and storage rooms were uncovered, while dozens of vessels there survived the ruins and were found whole. Many coins, ornaments, pendants, weapons and glass vessels were also found there, providing evidence of the wealth of the inhabitants. Beneath these Byzantine remains, the archaeologists exposed a structure from the Persian era (4th century BCE) in which an oven, clay loom weights and storage pitchers were found, indicating Persian settlement of the area. At another section of the excavations on the tell, the remains of three stages of settlement from the 11th-8th centuries BCE were found. It seems that at the beginning of that era, settlement in the region was relatively sparse but increased over time, becoming a prosperous, fortified city by the first century BCE.

In the course of these excavations, residents of the neighborhoods near Shikmona took an active part in the digs, and the excavating team arranged a special tour and hands-on experience at the site for a group of special needs children.

Uncovering the Kingdom of Israel 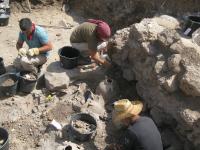