A boiling point of 5900 degrees Celsius and diamond-like hardness in combination with carbon: tungsten is the heaviest metal, yet has biological functions - especially in heat-loving microorganisms. A team led by Tetyana Milojevic from the Faculty of Chemistry at the University of Vienna report for the first time rare microbial-tungsten interactions at the nanometer range. Based on these findings, not only the tungsten biogeochemistry, but also the survivability of microorganisms in outer space conditions can be investigated. The results appeared recently in the journal Frontiers in Microbiology.

As a hard and rare metal, tungsten, with its extraordinary properties and highest melting point of all metals, is a very unlike choice for a biological system. Only a few microorganisms, such as thermophilic archaea or cell nucleus-free microorganisms, have adapted to the extreme conditions of a tungsten environment and found a way to assimilate tungsten. Two recent studies by biochemist and astrobiologist Tetyana Milojevic from the Department of Biophysical Chemistry, Faculty of Chemistry at the University of Vienna, shed light on the possible role of microorganisms in a tungsten-enriched environment and describe a nanoscale tungsten-microbial interface of the extreme heat- and acid-loving microorganism Metallosphaera sedula grown with tungsten compounds (Figures 1, 2). It is also this microorganism that will be tested for survivability during interstellar travel in future studies in outer space environment. Tungsten could be an essential factor in this.

Similar to ferrous sulfide mineral cells, artificial polyoxometalates (POMs) are considered as inorganic cells in facilitating prelife chemical processes and displaying "life-like" characteristics. However, the relevance of POMs to life-sustaining processes (e.g., microbial respiration) has not yet been addressed. "Using the example of Metallosphaera sedula, which grows in hot acid and respires through metal oxidation, we investigated whether complex inorganic systems based on tungsten POM clusters can sustain the growth of M. sedula and generate cellular proliferation and division." says Milojevic. Scientists were able to show that the use of tungsten-based inorganic POM clusters enables the incorporation of heterogeneous tungsten redox species into microbial cells. The organometallic deposits at the interface between M. sedula and W-POM were dissolved down to the nanometer range during fruitful cooperation with the Austrian Center for Electron Microscopy and Nanoanalysis (FELMI-ZFE, Graz)." Our findings add tungsten-encrusted M. sedula to the growing records of biomineralized microbial species, among which archaea are rarely represented," said Milojevic. The biotransformation of tungsten mineral scheelite performed by the extreme thermoacidophile M. sedula leads to the breakage of scheelite structure, subsequent solubilization of tungsten, and tungsten mineralization of microbial cell surface (Figure 3). The biogenic tungsten carbide-like nanostructures described in the study represent a potential sustainable nanomaterial obtained by the environmentally friendly microbial-assisted design.

"Our results indicate that M. sedula forms tungsten-bearing mineralized cell surface via encrusting with tungsten carbide-like compounds," explains biochemist Milojevic. This tungsten-encrusted layer formed around the cells of M. sedula may very well represent a microbial strategy to withstand harsh environmental conditions, such as during an interplanetary journey. Tungsten encapsulation can serve as a potent radioprotective armor against harsh environmental conditions. "The microbial tungsten armor allows us to further study the survivability of this microorganism in outer space environment," concludes Milojevic.

Publication in "Frontiers in Microbiology" 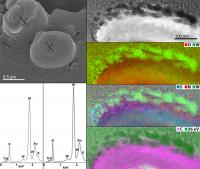