HOUSTON, Nov. 27, 2006 — Chemists at Rice University have discovered how to assemble gold and silver nanoparticle building blocks into larger structures based on a novel method that harkens back to one of nature's oldest known chemical innovations – the self-assembly of lipid membranes that surround every living cell.

Researchers believe the new method will allow them to create a wide variety of useful materials, including extra-potent cancer drugs and more efficient catalysts for the chemical industry.

The method makes use of the hydrophobic effect, a biochemical phenomena that all living creatures use to create membranes, ultra-thin barriers of fatty acids that form a strong yet dynamic sack around the cell, sealing it from the outside world. Cell membranes are one example of a micelle, a strong bilayer covering that is made of two sheets of lipid-based amphiphiles, molecules that have a water-loving, or hydrophilic, end, and a water-hating, or hydrophobic, end. Like two pieces of cellophane tape being brought together, the hydrophobic sides of the amphiphilic sheets stick to one another, forming the bilayered micelle.

"When the micelle forms, the process drives the packing of all the junction points, which connect the hydrophobic and the hydrophilic part of an amphiphile, into a high-density array," said Eugene Zubarev, the Norman Hackerman-Welch Young Investigator and assistant professor of chemistry. "By attaching a nanoparticle to the junction point of an amphiphile, we can, in effect, use micellization as a means to assemble billions and billions of individual nanoparticles into well-defined one-dimensional superstructures that are soluble in water."

Zubarev and colleagues synthesized V-shaped amphiphiles of polystyrene-b-poly(ethylene oxide) and attached two-nanometer diameter gold particles at the focal point of the V. Upon adding water and inducing micelle formation, the team found it could create tightly packed cylinders of gold nanoparticles measuring just 18 nanometers in diameter.

All micelles form in three allowable shapes – spheres, cylinders and sack-like vesicles. By varying the length of the polystyrene arm, the solvents used and the size of the gold particles, Zubarev and colleagues were able to form spheres, vesicles and vary the diameter of their cylinders, some of which grew to well-over 1,000 nanometers in length.

"We believe further manipulation of these parameters may provide an opportunity to control the optical and catalytic properties of these nanoassemblies," Zubarev said.

The research was funded by the National Science Foundation and the Welch Foundation. 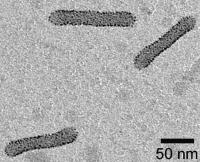