The South Pole and the rest of East Antarctica is cold now and was even more frigid during the most recent ice age around 20,000 years ago -- but not quite as cold as previously believed.

University of Washington glaciologists are co-authors on two papers that analyzed Antarctic ice cores to understand the continent's air temperatures during the most recent glacial period. The results help understand how the region behaves during a major climate transition.

In one paper, an international team of researchers, including three at the UW, analyzed seven ice cores from across West and East Antarctica. The results published June 3 in Science show warmer ice age temperatures in the eastern part of the continent.

"The international collaboration was critical to answering this question because it involved so many different measurements and methods from ice cores all across Antarctica," said second author T.J. Fudge, a UW assistant research professor of Earth and space sciences.

Antarctica, the coldest place on Earth today, was even colder during the last ice age. For decades, the leading science suggested ice age temperatures in Antarctica were on average as much as 9 degrees Celsius cooler than the modern era. By comparison, temperatures globally at that time averaged 5 to 6 degrees cooler than today.

Previous work showed that West Antarctica was as cold as 11 degrees C below current temperatures. The new paper in Science shows that temperatures at some locations in East Antarctica were only 4 to 5 degrees cooler, about half previous estimates.

"This is the first conclusive and consistent answer we have for all of Antarctica," said lead author Christo Buizert, an assistant professor at Oregon State University. "The surprising finding is that the amount of cooling is very different depending on where you are in Antarctica. This pattern of cooling is likely due to changes in the ice sheet elevation that happened between the ice age and today."

The findings are important because they better match results of global climate models, supporting the models' ability to reproduce major shifts in the Earth's climate.

Another paper, accepted in June in the Journal of Geophysical Research: Atmospheres and led by the UW, focuses on data from the recently completed South Pole ice core, which finished drilling in 2016. The Science paper also incorporates these results.

"With its distinct high and dry climate, East Antarctica was certainty colder than West Antarctica, but the key question was: How much did the temperature change in each region as the climate warmed?" said lead author Emma Kahle, who recently completed a UW doctorate in Earth and space sciences.

That paper, focusing on the South Pole ice core, found that ice age temperatures at the southern pole, near the Antarctic continental divide, were about 6.7 degree Celsius colder than today. The Science paper finds that across East Antarctica, ice age temperatures were on average 6.1 degrees Celsius colder than today, showing that the South Pole is representative of the region.

"Both studies show much warmer temperatures for East Antarctica during the last ice age than previous work -- the most recent 'textbook' number was 9 degrees Celsius colder than present," said Eric Steig, a UW professor of Earth and space sciences who is a co-author on both papers. "This is important because climate models tend to get warmer temperatures, so the data and models are now in better agreement."

"The findings agree well with climate model results for that time period, and thus strengthen our confidence in the ability of models to simulate Earth's climate," Kahle said.

Previous studies used water molecules contained in the layers of ice, which essentially act like a thermometer, to reconstruct past temperatures. But this method needs independent calibration against other techniques.

The new papers employ two techniques that provide the necessary calibration. The first method, borehole thermometry, takes temperatures at various depths inside the hole left by the ice drill, measuring changes through the thickness of the ice sheet. The Antarctic ice sheet is so thick that it keeps a memory of earlier, colder ice age temperatures that can be measured and reconstructed, Fudge said.

The second method examines the properties of the snowpack as it builds up and slowly transforms into ice. In East Antarctica, the snowpack can range from 50 to 120 meters (165 to 400 feet) thick, including snow from thousands of years which gradually compacts in a process that is very sensitive to the temperature.

"As we drill more Antarctic ice cores and do more research, the picture of past environmental change comes into sharper focus, which helps us better understand the whole of Earth's climate system," Fudge said.

Fudge, Steig and Kahle are among 40 authors on the Science paper. Other co-authors on the JGR: Atmospheres paper are Michelle Koutnik, Andrew Schauer, C. Max Stevens, Howard Conway and Edwin Waddington at the UW; Tyler Jones, Valerie Morris, Bruce Vaughn and James White at the University of Colorado, Boulder; and Buizert and Jenna Epifanio at Oregon State University.

Both papers were supported by the U.S. National Science Foundation. Both papers made use of the South Pole ice core, a project that in 2016 completed a 1.75 kilometer (1.09 mile) deep ice core at the South Pole. That project was funded by the NSF and co-led by Steig and Fudge with colleagues at the University of California, Irvine, and the University of New Hampshire.

Part of this article were adapted from an OSU press release. 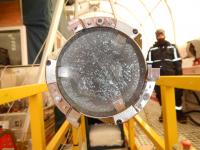