A scientist who has played a key role in documenting modern sea-level rise and its causes is to receive the 2020 Vetlesen Prize for achievement in the Earth sciences. The award, designed to be equivalent to a Nobel Prize, will go to French geophysicist Anny Cazenave.

Cazenave pioneered the use of satellite data over the past 20-plus years to chart rises in the surface of the oceans, and related changes in ice sheets, landmasses and freshwater bodies. Her work has tied together many previously loose threads linking the sea-level rise with climate change, say fellow scientists.

Cazenave will receive the $250,000 prize and a gold medal at Columbia University in April. The ceremony will mark the 60th anniversary of the Vetlesen Prize, which was established by the G. Unger Vetlesen Foundation. Many recognizable names of 20th- and 21st-century science have been recipients. The prize is administered by Columbia's Lamont-Doherty Earth Observatory.

Global mean sea level has risen 8 to 9 inches (21 to 24 centimeters) since the 1880s, and this is accelerating; recently, it has been about 0.14 inches a year (3.6 millimeters)--two and a half times the rate during most of the 20th century. The rise is not even; some regions are seeing more, others less. Scientists have determined that the increase is coming from two basic sources: melt water from glaciers and ice sheets, and expansion of seawater itself as it warms. It was Cazenave and her colleagues who quantified much of this by harnessing satellite data to analyze the height and mass of Earth's land and waters in unprecedented detail, and tease out how they interact.

Cazenave received her PhD. in geophysics in 1975 from the University of Toulouse. She went into space geodesy, the use of satellites to track changes in Earth's surface, gravity field and orientation in space. She first focused on the dynamics of the oceanic crust and the mechanically strong layer of the uppermost mantle below it. Among other things, she used early space-borne radars to show that the ocean surface is not flat, but subtly mimics the topography of the ocean floor. In other early work, she addressed questions about the rotation of Venus, and the origins of Mars's moons Phobos and Deimos.

Until the 1990s, sea levels were recorded mainly by tidal gauges anchored at coastal ports; levels in the open ocean were largely a black hole. Then, European and American space agencies launched a new series of satellite radar altimeters capable of monitoring sea and land levels everywhere in the world in more or less real time. Cazenave and her colleagues quickly developed ways to analyze the data and combine it with other information. By the early 2000s, they had determined that global sea level was going up about 3 millimeters a year--in some places three times that. The variations are due to regional factors including wind and wave patterns, and subsidence or rebound of the land itself.

"This was really something new," recalled Cazenave in a recent interview.

She and colleagues then quantified the sources of the rise. As part of this, they used altimetry measurements of the polar ice sheets, and newly available satellite data of changes in the ice sheets' gravity fields, which are linked with mass. Satellites, ships and, most recently, oceangoing robots, can now also track the salinity and temperature of ocean waters across the globe. Putting all this information together into a grand picture, Cazenave and her colleagues found that about half the sea level rise in recent decades has come from expansion of ocean waters, and half from melting glaciers and ice sheets. But with progressive warming, the balance has tipped in the last 10 or 12 years: Two thirds is now coming from melting. Cazenave and her colleagues have found that a small part is now also coming from a shift of water from rivers, lakes, soils and aquifers into the oceans. This appears due to a combination of factors including humans' increased pumping of surface and underground water, and intensifying evaporation caused by rising temperatures.

The techniques pioneered by Cazenave "continue to transform and deepen our appreciation of the seriousness of the climate crisis which we are experiencing," said physics professor W. Richard Peltier of the University of Toronto, who received the Vetlesen Prize in 2004.

Cazenave is director of Earth sciences at the International Space Sciences Institute in Bern, Switzerland. She previously was based at France's National Center for Space Studies. She was lead author of the sea-level sections of the Intergovernmental Panel on Climate Change's most recent full reports, in 2007 and 2014.

The Vetlesen Prize is awarded every three years for "scientific achievement resulting in a clearer understanding of the Earth, its history, or its relation to the universe." Previous recipients have included geologist J. Tuzo Wilson, who played a central role in developing the theory of plate tectonics; astronomer Jan Oort, who elucidated the architecture of the outer solar system and the galaxies; geochemist Wallace Broecker, a founder of modern climate science; and Susan Solomon, who identified the cause of Antarctica's ozone hole.

The Vetlesen Foundation was established in 1955 by Norwegian sailor and naval engineer George Unger Vetlesen. After becoming a shipbuilder in the United States, Vetlesen played key roles in the Scandinavian resistance against the Nazis during World War II, and later in shipping and air travel between Scandinavia and North America. In addition to funding the Vetlesen Prize, the foundation has long been a major supporter of ongoing Earth-science research. 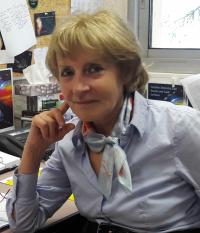 Leader in Her Field