A new model released today at the meeting of the American Association for the Advancement of Science by UConn ecologist Jamie Vaudrey pinpoints sources of nitrogen pollution along Long Island Sound, and shows municipalities what they might do to alleviate it.

Long Island Sound is an estuary of the Atlantic Ocean bordered by Connecticut to the north, New York City to the west, and Long Island to the south. The Sound is home to dozens of species of birds, 170 species of fish, and more than 1,200 species of invertebrates. Historically it has supported rich recreational and commercial fisheries for lobster, oysters, blue crabs, scallops, striped bass, flounder, and bluefish.

In recent decades however, those fisheries have suffered from excess nitrogen in the water. The extra nitrogen feeds seaweed and algae blooms that use up oxygen, killing fish, and changing the ecology in ways that make it less suited to shellfish. This is called eutrophication.

But the nitrogen pollution - and subsequent fish kills and habitat degradation - isn't distributed evenly throughout Long Island Sound. There are 116 rivers, estuaries, harbors, and bays along Long Island Sound, and the amount of nitrogen runoff varies enormously from one to another. Major sources of nitrogen include septic tanks and sewers, fertilizer from lawns and parks, agricultural practices, and atmospheric deposition from dust, rain, and snow.

There are lots of actions that citizens and towns can take to minimize the runoff. But they can only reduce it if they know it's there in the first place.

There was very little data on nitrogen runoff from individual communities in Long Island Sound when Vaudrey and her colleagues first set out to look at the problem. They spent four years collecting data on where the nitrogen comes from in each of the 116 estuaries, rivers, and harbors, because while people may only care a little about Long Island Sound in the abstract, they care a lot about their own specific place. The beach where they swim, the pier they fish from, the coast they sail along, these are what people care about. So the researchers constructed a detailed model that anyone can download to look at their specific river, harbor, or bay.

"[The model] is a tool for citizens and managers to explore the impact of different actions," says Vaudrey, an assistant research professor in marine sciences.

The model is in the form of an Excel spreadsheet. There's a page titled 'scenarios,' where you can choose a specific community and alter the settings to see, for example, how changing the fertilizer applications in local parks will affect nitrogen runoff. There's also a page called 'interesting results' that shows the 27 places with the highest load of nitrogen per water area. The Pequonnock River in Bridgeport, Conn. has the highest load, followed by rivers in Greenwich, Conn., Mamaroneck, N.Y., and Fairfield, Conn. But other harbors and rivers located near the worst offenders have dramatically lower nitrogen loads, showing that population density isn't destiny, and that land use decisions, proper sewage treatment, and citizen education can make a difference.

The model has already been used by the Connecticut Department of Energy and Environmental Protection (CT-DEEP) to identify eight Connecticut estuaries that need further study and nitrogen reduction plans, and the department intends to use it in an upcoming evaluation of septic systems, according to Kelly Streich at CT-DEEP's Long Island Sound Study.

The Nature Conservancy has also worked with the model.

"Although great progress has been made cleaning up Long Island Sound in the last two decades, Vaudrey's tool points to places where more work is needed to restore and protect healthy conditions. With this information, decision-makers can identify the most significant sources of nitrogen pollution and use proven solutions - such as upgrading and modernizing septic systems or reducing fertilizer use - to sustain clean water," says Holly Drinkuth, director of outreach and watershed projects at The Nature Conservancy in Connecticut.

Vaudrey hopes to work with organizations adept at outreach, such as The Nature Conservancy, Save the Sound, and the Long Island Sound Study, to better inform management decisions at the local level.

She is also starting work on a second model, one that looks at what happens in the coastal waters once nitrogen is introduced. Each bay and harbor is unique; how a bay responds to the nitrogen load depends upon how much freshwater flows in from rivers or streams, as well as the size and depth of the bay, and the height of the tides. The end goal is a model that predicts the nitrogen load needed to get the water quality the community wants in each bay.

The model can be found at: http://vaudrey.lab.uconn.edu/embayment-n-load/ 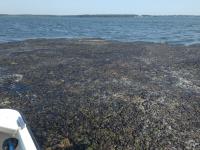