Katelynn Toomer and colleagues have discovered that defects in tiny, hair-like cellular structures can lead to mitral valve prolapse (MVP), a common heart disorder that affects up to one in 40 people worldwide. Their findings - based on a genetic analysis of a multigenerational family with an inherited form of the disease - identify a potential underlying cause of this widespread but little-understood condition. MVP usually causes only mild symptoms in patients, but in some cases it can result in abnormal heart rhythm and loss of heart function. Despite the disease's prevalence, scientists do not yet fully understand why MVP occurs or how it unfolds in the heart. In this study, Toomer et al. tracked the development of human and mouse mitral valves and discovered that a loss of cilia - antenna-like structures that receive signals from outside a cell - in valve tissue caused congenital defects that mirrored those seen in patients with MVP. They also studied gene expression in a multigenerational family (43 members), 11 of whom had an inherited form of MVP, as well as data from a previous genetic study of 1,412 MVP cases. The analysis revealed that the patients with MVP harbored a mutation in a gene named DZIP1 that normally guides proper cilia growth. Further experiments showed that mouse pups lacking DZIP1 displayed impaired formation of cilia during their development, which was followed by MVP and valve defects later in life. The study's insights into the genetic and cellular origins of MVP could facilitate the design of drug-based interventions for the condition, which can currently only be treated with surgery.

Defects in cellular antennae can cause a common heart condition 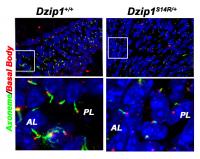