The prestigious journal Chem (Cell Press, impact factor: 19.735) publishes the first mechanosynthesis of a molecular crystal with a Borromean topology. The research has been carried out by an international team led by Prof. Pierangelo Metrangolo, Giuseppe Resnati, and Giancarlo Terraneo at the Department of Chemistry, Materials and Chemical Engineering "Giulio Natta" of the Politecnico di Milano.

The results obtained by the Politecnico di Milano group have shown that mechanosynthesis can be applied to the self-assembly of complex multi-component supramolecular structures such as the Borromean rings, demonstrating, in detail, the mechanism of formation of this complex topology. These findings open up new perspectives in the design of complex chemical systems such as the mechanosynthesis of diamonds, the development of absorbent materials that enable the storage of hydrogen to be used in the advanced automotive, ultra-light composites for aeronautics, and the development of new drugs.

Mechanochemistry studies the application of mechanical energy to a chemical reaction carried out in the solid-state, to influence its rate and trajectory. The origins of mechanochemistry can be traced back to the Stone Age, where the use of mortar and pestle for the preparation of food or dyes represented a process to induce chemical transformations by mechanical forces.

From an environmental point of view, the mechanochemical processes are particularly sustainable since, taking place in the solid state, they do not use toxic or flammable solvents. For this reason, their use is widely spreading in numerous industrial sectors of green chemistry and sustainable engineering including pharmaceuticals, polymer chemistry, and composites.

Despite this, the mechanisms by which mechanical energy contributes to the breaking and formation of new chemical bonds are not fully understood, yet, as well as the general applicability of mechanochemistry to diverse chemical processes.

The etymology of the name dates back to Federico Borromeo, cardinal and archbishop of Milano who chose the Borromean Knot as his emblem. The symbol of the Borromean dynasty is the three entangled rings and represents the Trinity. The Borromean Rings indicate "strength in unity". This symbol has been also adopted by other cultures in various ages, including the Scots and the Vikings.

From a mathematical point of view, the Borromean topology is one of the most complex and fascinating. 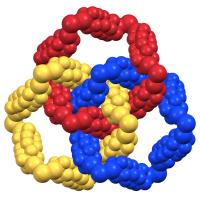