(TORONTO, Canada - November 17, 2016) - A new method which doubles the usual time donor lungs can remain outside the body can benefit patients, staff and allow retrieval of donor lungs across greater geographical areas, says a study published in The Lancet Respiratory Medicine.

After retrieval, donor lungs are usually bathed in an organ-preserving solution, inflated with oxygen and kept on ice less than eight hours. If too much time passes before the organ can be transplanted, the organ may become too damaged to be used. The maximum acceptable time in most centers has been six to eight hours.

Dr. Marcelo Cypel, thoracic surgeon at Toronto General Hospital (TGH), University Health Network (UHN) and Scientist, Toronto General Research Institute (TGRI) and the Toronto Lung Transplant Program team demonstrated that preserving donor lungs with the help of ex vivo lung perfusion for up to 20 hours is safe and will enable more transplants to be performed with greater flexibility in their timing.

"It's a change in paradigm for how we do lung transplants," says Dr. Cypel, adding that there are many benefits to patients who must uproot their lives to live near a transplant centre, and to staff who frequently perform these complex operations in the middle of the night.

Dr. Shaf Keshavjee, Director of the Toronto Lung Transplant Program, Surgeon in Chief, Sprott Department of Surgery at UHN, says that "instead of racing the clock to transfer the organ from the donor to the recipient, we have created the opportunity for more detailed assessment and treatment of the organ, while also providing valuable hours to optimize the logistics of the transplant operation. This will eventually translate into improved outcomes and reduced costs of organ transplantation."

Despite the use of higher-risk organs in the group in which lungs were preserved for more than 12 hours, early outcomes between the two groups were similar.

The two groups were followed between two and a half and four years, and the main results measured were primary graft dysfunction, or injury to the lung after the first 72 hours and a leading cause of death after transplantation, intensive care unit and hospital stay and survival of patients. No differences were observed between the two groups in primary graft dysfunction, and length of hospital and intensive care unit stay was the same between the two groups.

The study used a combination of warm and cold preservation to increase the length of time the lungs were able to survive safely outside the donor body.

Retrieved lungs were first cooled to slow down deterioration and tissue injury, transported to TGH, then treated and evaluated with the ex vivo lung perfusion (EVLP) system for four to six hours - first pioneered by Drs. Keshavjee and Cypel in 2008 at TGH. Subsequently lungs were subjected to protective cooling again until transplantation.

In the EVLP system, the lungs are placed in a protective dome in which a system continuously pumps a bloodless solution of oxygen, proteins and nutrients into the injured donor lungs, mimicking normal physiological conditions. This makes it possible for the injured cells to begin repairing themselves, and sets the stage for more sophisticated repair techniques to be applied to donor lungs.

Since 2012, there has been an unprecedented 30 per cent increase in lung transplants at TGH as a result of the EVLP system. TGH now routinely performs more than 120 lung transplants a year, making this one of the largest centres in the world.

Dr. Cypel describes the paradigm shift as not only preserving donor organs, but interrupting the injury process to the lungs, and enhancing their recovery.

With longer preservation times, we can get organs from longer distances anywhere in North America, he says, while allowing more flexibility in planning surgeries, in allowing patients more latitude to travel to Toronto for their transplants rather than waiting in Toronto, and extra time for better immunological matching between donated lungs and recipients. It also provides more opportunities to treat injured organs initially deemed unsuitable for transplant, he adds.

This study relied on the Lung Transplant Database, which is maintained by funds from the Toronto Lung Transplant Program. Drs. Cypel, Waddell and Keshavjee are co-founders of Perfusix Canada, XOR Labs Toronto, and consultants for Lung Bioengineering (United Therapeutics).

Toronto General Hospital is a partner in University Health Network, along with Toronto Western, the Princess Margaret Cancer Centre, Toronto Rehabilitation Institute and the Michener Institute for Applied Health Sciences. The scope of research and complexity of cases at Toronto General Hospital have made it a national and international source for discovery, education and patient care. It has one of the largest hospital-based research programs in Canada, with major research in cardiology, transplantation, surgical innovation, infectious diseases, genomic medicine and rehabilitation. Toronto General Hospital is a research and teaching hospital affiliated with the University of Toronto. http://www.uhn.ca 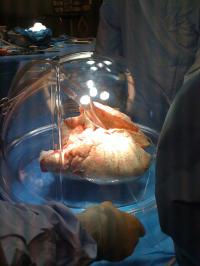