A research team led by Prof. Hiroshi M. Yamamoto of the Institute for Molecular Science, National Institutes of Natural Sciences has developed a novel superconducting transistor which can be switched reversibly between ON and OFF by light-irradiation. This achievement is a milestone for future high-speed switching devices or highly-sensitive optical sensors.

The field-effect transistor (FET) is a basic switching element that controls electrical current in electronic circuits. FETs are currently included in a variety of electronic devices such as smart phones and computers. In recent years, much effort has been devoted to develop a superconducting FET as a key technology for computations using quantum states.

In this research, the team fabricated a novel photo-switchable transistor by replacing the gate electrode in the conventional FET with a 'spiropyran'-thin-film. When Dr. Masayuki Suda, a member of the research team, shone a pale UV light on this novel FET, it showed a rapid decrease of electrical resistance and turned into a superconducting state after 180 seconds. Spiropyran is a photo-active organic molecule that shows intra-molecular electrical polarization by UV light irradiation. In this system, carriers for the superconductivity can be accumulated by UV light-induced electrical polarization of the spiropyran-film. Dr. Suda also found that the device can be switched to the superconducting state both by gate-voltage control and light-irradiation control. Such a multi-mode operation obtained by combining two kinds of functional molecules, BEDT-TTF and spiropyran, indicates the high designability of organic systems. The superconductivity could also be removed by visible light-induced depolarization of the film.

This research presents a novel concept in which "superconductivity can be switched by optical stimuli," and will drive innovation in the field of future high-speed switching devices or high-sensitivity optical sensors. "Now it takes 180 seconds to switch the FET, but it can be operated much faster in principle," said Dr. Suda, "and it will open a way to a new type of devices that can satisfy glowing demand for a high-speed information infrastructure."

Information of the paper

This work was performed by a collaboration between Dr. Masayuki Suda (Assistant professor) and Dr. Hiroshi M. Yamamoto (Professor) of the Institute for Molecular Science, National Institutes of Natural Sciences and Dr. Reizo Kato (Chief Scientist) of RIKEN. 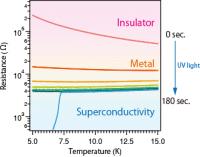