The latest DNA nanodevices created at the Technische Universitaet Muenchen (TUM) - including a robot with movable arms, a book that opens and closes, a switchable gear, and an actuator - may be intriguing in their own right, but that's not the point. They demonstrate a breakthrough in the science of using DNA as a programmable building material for nanometer-scale structures and machines. Results published in the journal Science reveal a new approach to joining - and reconfiguring - modular 3D building units, by snapping together complementary shapes instead of zipping together strings of base pairs. This not only opens the way for practical nanomachines with moving parts, but also offers a toolkit that makes it easier to program their self-assembly.

The field popularly known as "DNA origami," in reference to the traditional Japanese art of paper folding, is advancing quickly toward practical applications, according to TUM Prof. Hendrik Dietz. Earlier this month, Dietz was awarded Germany's most important research award, the Gottfried Wilhelm Leibniz Prize, for his role in this progress.

In recent years, Dietz and his team have been responsible for major steps in the direction of applications: experimental devices including a synthetic membrane channel made from DNA; discoveries that cut the time needed for self-assembly processes from a week to a few hours and enable yields approaching 100%; proof that extremely complex structures can be assembled, as designed, with subnanometer precision.

Yet all those advances employed "base-pairing" to determine how individual strands and assemblies of DNA would join up with others in solution. What's new is the "glue."

"Once you build a unit with base pairs," Dietz explains, "it's hard to break apart. So dynamic structures made using that approach tended to be structurally simple." To enable a wider range of DNA nanomachines with moving parts and potentially useful capabilities, the team adapted two more techniques from nature's biomolecular toolkit: the way proteins use shape complementarity to simplify docking with other molecules, and their tendency to form relatively weak bonds that can be readily broken when no longer needed.

For the experiments reported in Science, Dietz and his co-authors - doctoral candidates Thomas Gerling and Klaus Wagenbauer, and bachelor's student Andrea Neuner from TUM's Munich School of Engineering - took inspiration from a mechanism that allows nucleic acid molecules to bond through interactions weaker than base-pairing. In nature, weak bonds can be formed when the RNA-based enzyme RNase P "recognizes" so-called transfer RNA; the molecules are guided into close enough range, like docking spacecraft, by their complementary shapes.

The new technology from Dietz's lab imitates this approach. To create a dynamic DNA nanomachine, the researchers begin by programming the self-assembly of 3D building blocks that are shaped to fit together. A weak, short-ranged binding mechanism called nucleobase stacking can then be activated to snap these units in place. Three different methods are available to control the shape and action of devices made in this way.

"What this has given us is a tiered hierarchy of interaction strengths," Dietz says, "and the ability to position - precisely where we need them - stable domains that can recognize and interact with binding partners." The team produced a series of DNA devices - ranging from micrometer-scale filaments that might prefigure technological "flagella" to nanoscale machines with moving parts - to demonstrate the possibilities and begin testing the limits.

For example, transmission electron micrographs of a three-dimensional, nanoscale humanoid robot confirm that the pieces fit together exactly as designed. In addition, they show how a simple control method - changing the concentration of positive ions in solution - can actively switch between different configurations: assembled or disassembled, with "arms" open wide or resting at the robot's side.

Another method for switching a DNA nanodevice between its different structural states - by simply raising and lowering the temperature - proved to be especially robust. For earlier generations of devices, this required separating and re-joining DNA base pairs, and thus the systems were "worn out" by dilution and side-reactions after just a few cycles of switching. A scissor-like actuator described in the current paper underwent more than a thousand temperature-switched cycles over a four-day period with no signs of degradation.

"Temperature cycling is a way to put energy into the system," Dietz adds, "so if the reversible conformational transition could be coupled to some continously evolving process, we basically now have a way not just to build nanomachines, but also to power them."

There is yet another dimension to the flexibility gained by adding shape-complementary components and weak bonding to the DNA nanotechnology toolkit. Programming self-assembly by base-pairing alone is like writing computer code in machine language. The hope is that this new approach will make it easier to bend DNA origami toward practical ends, in much the same way the advent of higher-level computer programming languages spurred advances in software engineering.

Dietz compares it to building with children's toys like LEGO: "You design the components to be complementary, and that's it. No more fiddling with base-pair sequences to connect components."

This research was supported by the German Research Foundation (DFG) through the Excellence Clusters CIPSM and NIM, the Collaborative Research Center SFB863, the TUM Institute for Advanced Study, the TUM International Graduate School of Science and Engineering, and the Munich School of Engineering; the European Research Council (ERC Starting Grant); and the Hans L. Merkle Foundation.

Technische Universitaet Muenchen (TUM) is one of Europe's leading research universities, with around 500 professors, 10,000 academic and non-academic staff, and more than 37,000 students. Its focus areas are the engineering sciences, natural sciences, life sciences and medicine, reinforced by schools of management and education. TUM acts as an entrepreneurial university that promotes talents and creates value for society. In that it profits from having strong partners in science and industry. It is represented worldwide with a campus in Singapore as well as offices in Beijing, Brussels, Cairo, Mumbai, and São Paulo. Nobel Prize winners and inventors such as Rudolf Diesel and Carl von Linde have done research at TUM. In 2006 and 2012 it won recognition as a German "Excellence University." In international rankings, TUM regularly places among the best universities in Germany. 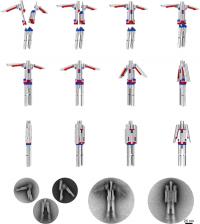