New antennas so thin that they can be sprayed into place are also robust enough to provide a strong signal at bandwidths that will be used by fifth-generation (5G) mobile devices. Performance results for the antennas, which are made from a new type of two-dimensional material called MXene, were recently reported by researchers at Drexel University and could have rammifications for mobile, wearable and connected "internet of things" technology.

The MXene antennas, which have been in development at Drexel for just over two years, are already performing nearly as well as the copper antennas found in most mobile devices on the market today, but with the benefit of being just a fraction of their thickness and weight.

"This combination of communications performance with extreme thinness, flexibility and durability sets a new standard for antenna technology," said Yury Gogotsi, PhD, Distinguished University and Bach professor of Materials Science and Engineering in Drexel's College of Engineering, who is the lead author of a paper on the MXene antennas recently published in the journal Advanced Materials. "While copper antennas have been the best in terms of performance for quite some time, their physical limitations have prevented connected and mobile technology from making the big leaps forward that many have predicted. Due to their unique set of characteristics MXene antennas could play an enabling role in the development of IoT technology."

While mobile communications companies currently are on the cusp of introducing 5G technology, which could capitalize on an less-used portion of the telecommunication spectrum to enable faster data transmission, it will likely become the standard range of operation for new technology.

Beyond reaching performance capabilities, antennas for devices of the future must also be able to acquit themselves well in a variety of environments outside of the circuitboards of phones and computers. According to Gogotsi, this makes MXene an appealing material for new antennas because it can be spray applied, screen printed or inkjet-printed onto just about any substrate and remains flexible without sacrificing performance.

"Generally copper antenna arrays are manufactured by etching printed circuit boards, this is a difficult process to undertake on a flexible substrate," said Meikang Han, PhD, a post-doctoral researcher at the A.J. Drexel Nanomaterials Institute who contributed to the research."This puts MXene at a distinct advantage because it disperses in water to produce an ink, which can be sprayed or printed onto building walls or flexible substrates to create antennas."

In the paper, Gogotsi and his collaborators, including Professor Gary Friedman, PhD, and Kapil Dandekar, PhD, E. Warren Colehower Chair Professor of the Electrical and Computer Engineering Department in Drexel's College of Engineering, reported on the performance of three sets of spray-coated MXene antennas, which were between 7-14 times thinner and 15-30 times lighter than a similar copper antenna - even thinner than a coat of paint. They tested the antennas in both lab and open environments for key performance measures of how efficiently the antenna converts power into directed waves - gain, radiation efficiency and directivity. And they did the testing at the three radio frequencies commonly used for telecommunication, including one in the target frequency of operation for 5G devices.

Their performance exceeded that of several other new materials being considered for antennas, including silver ink, carbon nanotubes and graphene. And, siginificantly, these performance numbers did not waiver when the MXene antennas were subjected to as many as 5,000 bending cycles - a mark of durability that far surpasses its peer materials.

"MXene's scalability and environmental sustainability in manufacturing has been well estabilished, for this material to now achieve performance goals on pace with the best materials on the market today is certainly a significant development," Gogotsi said. "As we continue to test various coating patterns and techniques while additionally optimizing the composition of MXene materials, I expect their performance to continue to improve." 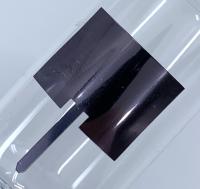