A Chinese research team announced it has successfully metallized nitrogen at extreme conditions. This exciting result was published in Nature Communications on July 6.

The team, working at the Institute of Solid State Physics at the Hefei Institutes of Physical Science (CASHIPS), developed its own pulsed-laser heating system and ultra-fast optical detection technology to conduct the experiment.

Nitrogen represents about 78 percent of air by volume. Normally, it maintains in a pretty stable molecular gas state without any color or odor. But nitrogen was expected to present quite different properties with exposure to extreme conditions.

For instance, it is believed to turn into a metal in the core of our Earth, and is considered to be one of the most energetic materials in existence.

For years, scientists have been struggling to synthesize a series of materials with extremely high energy based on nitrogen, especially polymeric and metallic nitrogen.

Moreover, it is especially relevant to explore metallic nitrogen at extremely high pressures and temperatures given the challenges of reliable achievement of another equally important material, metallic hydrogen, which is predicted to be a room-temperature superconductor.

In fact, many attempts were made via a variety of methods in previous studies, such as static pressure research with diamond anvil cell and dynamic pressure studies with a gas gun.

The previous results contributed some specific sights into the "hologram" of pressure-temperature-state corresponding information of nitrogen but limited.

"The key is to understand the whole pressure-temperature conditions concerning the transition from molecular nitrogen to metallic nitrogen," said Alexander Goncharov, a member of China's "Thousand Talent Program," who leads a study team. Goncharov also noted that a particular challenge in this kind of study is the mechanism of insulator-to-metal transition, and the existence and location of the critical point where the transition character changes.

JIANG Shuqing, the first author of the paper as well as a scientist working with CASHIPS, said the team scanned the hologram of the properties of nitrogen at a pretty wide range of extreme conditions from 0 to 170 GPa and up to about 8000 K, using the team's self-developed experimental system.

"This allowed us to determine the pressure-temperature region of metallic nitrogen. It's generally above 125 GPa and 2500 K," said JIANG. "The result provided us detailed information on insulator-to-metal transition in nitrogen."

JIANG said the team believes these observations create a better understanding of the interplay between molecular dissociation, melting, and metallization, thus revealing features that are also common in hydrogen. 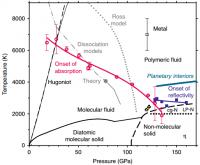 The P-T Phase Diagram of Nitrogen