Warm ocean water, not warm air, is melting the Pine Island Glacier's floating ice shelf in Antarctica and may be the culprit for increased melting of other ice shelves, according to an international team of researchers.

"We've been dumping heat into the atmosphere for years and the oceans have been doing their job, taking it out of the air and into the ocean," said Sridhar Anandakrishnan, professor of geosciences, Penn State. "Eventually, with all that atmospheric heat, the oceans will heat up."

The researchers looked at the remote Pine Island Glacier, a major outlet of the West Antarctic Ice Sheet because it has rapidly thinned and accelerated in the recent past.

"It has taken years and years to do the logistics because it is so remote from established permanent bases," said Anandakrishnan.

Pine Island Glacier or PIG lies far from McMurdo base, the usual location of American research in Antarctica. Work done in the southern hemisphere's summer, December through January 2012-13, included drilling holes in the ice to place a variety of instruments and using radar to map the underside of the ice shelf and the bottom of the ocean. Penn State researchers did the geophysics for the project and the research team's results are reported today (Sept. 13) in Science.

"The way the ocean water is melting the ice shelf is a deeply non-uniform way," said Anandakrishnan. "That's going to be more effective in breaking these ice shelves apart."

The breaking apart of the ice shelf in the channels is similar to removing an ice jam from a river. The shelf was plugging the channel, but once it is gone, the glacier moves more rapidly toward the sea, forming more ice shelf, but removing large amounts of ice from the glacier.

"Antarctica is relatively stable, but that won't last forever, said Anandakrishnan. "This is a harbinger of what will happen."

The researchers believe that the interaction of the ocean beneath the ice shelf and melting of the ice shelf is an important variable that should be incorporated into the sea level rise models of global warming. Other recent research shows that without the channelized underbelly of the ice shelf and glacier, melting would be even more rapid.

"The Antarctic has been relatively quiet as a contributor to sea rise," said Anandakrishnan. "What this work shows is that we have been blind to a huge phenomenon, something that will be as big a player in sea level rise in the next century as any other contributor." 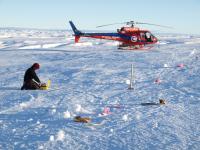