Because instruments were finally installed there, scientists can no longer say that East Antarctica is unusually seismically silent.

Since the first earthquake was detected in 1982, there have been just eight more seismic events recorded in East Antarctica. But after a team that included Amanda Lough, PhD - then a student but now an assistant professor in Drexel University's College of Arts and Sciences - set up the first winter-through-summer seismic array, 27 earthquakes were recorded in 2009 alone, tripling the total number of events recorded on East Antarctica's section of the Earth's crust.

So instead of being exceptionally stable, it appears East Antarctica just wasn't being watched closely enough.

"Ultimately, the lack of recorded seismicity wasn't due to a lack of events but a lack of instruments close enough to record the events," explained Lough, who is the lead author on a study discussing the array's results in Nature Geoscience.

To scientists, East Antarctica is what's known as a "craton": a large, stable piece of rock on the Earth's crust that forms significant pieces of continents. But East Antarctica was always considered to be unusual for its lack of seismic activity. Many believed this was due to suppression via the incredible weight of Antarctica's thick ice.

Recordings from the array, however show that East Antarctica is similar to other cratons across the world, especially like the Canadian Shield, which stretches from the Northwest Territories to Quebec. The ice did not appear to be the culprit of the silence, it was solely a lack of ability to record what was happening.

Not having an array wasn't for lack of motivation, though. Setting up the array was no easy task, and it took a lot of determination and effort from the team Lough was on.

That included living in Antarctica's frigid, harsh environment, and flying from point to point across Antarctica's icy expanse (often having to dig out their own runways) to place the seismic recording equipment (which required even more digging). Those flights were usually cramped, with Lough wedging herself in among equipment and even fuel.

But the efforts paid off once the 27 earthquakes were all measured in 2009, each ranging in magnitude from 2.1 to 3.9.

Most seismic activity was recorded in basins near the Gumburtsev Subglacial Mountains, which Lough and others believe are part of an ancient continental rift system, older than the type in West Africa. "Rifts" are areas where the Earth's crust is being pulled apart from each other.

"There is a study we cite in the paper that shows that more than 52 percent of seismic events in continental areas occur in rifted crust, so it's not unexpected that we see the correlation here," Lough said.

Very little seismic activity was recorded outside of the rifts, which are similar to the New Madrid Seismic Zone in the southern Midwest United States.

"The rifts provide zones of weakness that enable faulting to occur more easily, and it may be that the situation here is such that activity is occurring preferentially along these areas of preexisting weakness," Lough said, though she emphasized "we only have one year of data" and more needs to be observed before they have a "full picture."

But the study from this array will contribute to gaining a fuller picture of what happens inside of the Earth's tectonic plates.

"East Antarctica is basically another piece of the puzzle," Lough said.

And while Antarctica is largely home to penguins, seals and not much else, what is learned there can provide lessons for the places on Earth where people do live. The big one: You don't know what you don't measure.

"Antarctica is the least-instrumented continent, but other areas of the globe also lack sufficient instrumentation," Lough said. "There are some obvious holes in coverage in the Global Seismic Network. For example, the ocean covers 71 percent of the planet, but it is expensive and very difficult to get instruments there. We need to think about improving coverage and then improving the density of it." 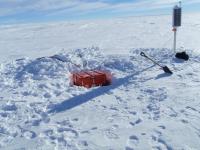 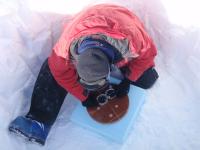