The School of Chinese Medicine (SCM) of Hong Kong Baptist University (HKBU) conducted a clinical observation of scalp acupuncture treatment for 68 children with autism. The findings indicated that 66 patients have shown improvements after treatment, resulting in an overall efficacy rate of 97%. The treatment was found to be more effective in younger children.

Between May 2010 and June 2013, Ms Ann Yau, Lecturer of SCM's Division of Continuing and Professional Education, attended to the 68 autistic patients at the HKBU Chinese medicine clinics, comprising 57 boys and 11 girls aged between 2 and 10. She performed on each of the patients a course of scalp acupuncture comprising 30 bi-weekly sessions over a period of 15 weeks.

Ms Yau selected five of the most common symptoms of autism as assessment criteria: impaired social interaction, delayed verbal communication, behavioural problems, noise sensitivity and food selectivity. The young patients were given a rating for each of the symptoms, the higher the score, the more serious the symptom is. The data were compared and analysed before and after the treatment programme.

For the natal autistic patients, decreases were registered in the total score of each of the symptoms: a drop of 34.8% in delayed verbal communication, 37.9% in impaired social interaction, 27.6% in behavioural problems, 21.8% in food selectivity, and 17.2% in noise sensitivity.

The children with regressive autism also recorded decreases in the symptoms: a decrease of 31.4% in impaired social interaction, 32.8% in delayed verbal communication, 21.4% in noise sensitivity, 23.4% in behavioural problems, and 30.9% in food selectivity.

Ms Yau said that after the treatment the patients showed more notable improvements in social interaction and verbal communication than in behaviours, noise sensitivity and food selectivity. Moreover, the earlier the children receive acupuncture therapy, the higher the effectiveness. This therapy is also more effective for natal autistic patients than patients with regressive autism. 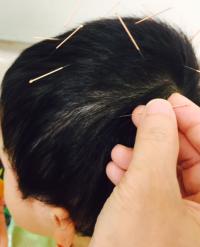