Amazonia's huge biodiversity originated with the formation of the Andes and, as such, dates back further than previously realised, claims an article written by an international research group, headed by a researcher from the University of Gothenburg, published in the journal Science.

"With the results we present in this article, we've rewritten the entire history of Amazonia in terms of the development of its biodiversity," says Alexandre Antonelli from the University of Gothenburg's Department of Plant and Environmental Sciences, and scientific curator at the Gothenburg Botanical Garden (Sweden).

Amazonia's wealth of species is by far the greatest in the world. Although researchers have long suspected that the diversity of the Amazonian rainforest was affected by the Andes, the causal links have been unclear until now, and there have been a wide range of scientific theories on the origins of the species found there.

A team of researchers led by Antonelli and the University of Amsterdam's Carina Hoorn has now compared the pattern of today's biodiversity in Amazonia with geological and molecular data for the last 65 million years – ever since the South American continent separated from Africa and the dinosaurs became extinct.

"We suspected from some scattered fossils and dated species trees that the Amazonian diversity arose after the separation from Africa. So we looked at the whole period. I worked mainly on coordinating a survey of DNA-based studies of the relationships between different species of plants and animals. We've examined hundreds of scientific publications and have found that very few of the genera are as young as people thought."

GREATEST BIODIVERSITY IN CONNECTION WITH THE ANDES

The collated results show that the greatest biodiversity is to be found in connection with the Andes, an area that formed when the tectonic plates along the Pacific coast were pressed together to create this mighty range of mountains. The new mountains had a major impact on the environment, with living conditions changing fundamentally for plants and animals in Amazonia. The restructuring of the Earth's crust changed the large wetland areas found in northern South America, which dried up as the Amazon River formed. This, in turn, opened up new land for colonisation by plants and animals.

"We were surprised that there was such a strong link between the formation of the Andes and the diversity in Amazonia," says Antonelli, who was born in Brazil. "The area was considered a kind of paradise where evolution could take place undisturbed, but this hasn't been the case at all – a lot has happened in the region."

The article Amazonia through time: Andean uplift, climate change, landscape evolution, and biodiversity was published in the journal Science on 12 November. The 18-strong team behind the article includes researchers from the Netherlands, Switzerland, Spain, the UK, Sweden, Brazil, Colombia, Panama, Venezuela and the US.

Subscribers can download the article from: www.sciencemag.org/cgi/content/short/330/6006/927, or a copy can be requested from Alexandre Antonelli (see below for contact information).

The results were presented at a seminar in Amsterdam, the Netherlands, on the same day: www.science.uva.nl/ibed/home.cfm 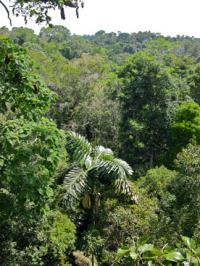