Cheng Chin will make a vacuum chamber in his laboratory the coldest place in Chicago in order to simulate the impossibly hot conditions that followed the big bang during the earliest moments of the universe.

"It turns out that matter at ultralow and ultrahigh temperatures might have something in common," said Chin, an Assistant Professor in Physics at the University of Chicago. Chin’s strategy for probing the formative moments of the early universe may also help boost the capability of quantum computers. The work is supported by a 2006 Packard Fellowship for Science and Engineering. As one of 20 new Fellows of the David and Lucile Packard Foundation, Chin will receive an unrestricted research grant of $625,000 over five years.

Astrophysicists believe that moments after the big bang, subatomic particles were spread evenly throughout a uniform environment that pervaded the universe. "After billions of years, our universe is now far from uniform, with all kinds of complex structure: galaxies, planet systems, you and me," Chin said. "What is the origin of these complexities and when and how did they develop?"

One scenario, called quantum fluctuation, describes a random process. Chin likened it to throwing beans on the floor. Any pattern that forms will arise entirely by chance. The alternative theory depends on what scientists call the Kibble-Zurek mechanism in which matter undergoes a quantum phase transition.

In the physics of everyday life, a phase transition occurs when snow flakes form out of cooling water vapor on a winter day. In the quantum world of subatomic particles, matter undergoes more exotic phase transitions under ultracold or ultrahot conditions. According to the laws of quantum physics, these transitions display a universal behavior regardless of whether they occur at absolute zero or under big-bang conditions of many billions of degrees.

Physicists are unable to recreate the big bang on Earth, but they can watch how uniformly distributed atoms develop patterns in an ultracold vacuum chamber. In his laboratory at the Gordon Center for Integrative Science, Chin will cool the atoms in a two-foot cylindrical vacuum chamber to billionths of a degree above absolute zero—minus 459.67 degrees Fahrenheit.

The cooled atoms will become a superfluid, an exotic state of matter that differs dramatically from the solids, liquids and gases that dominate everyday life. As the most uniform medium that technology can produce, the ultracold atoms in this superfluid will simulate how evenly distributed matter forms patterns under extreme conditions.

If the Kibble-Zurek process was operating after the big bang, voids and clumps of matter formed as the universe expanded and cooled over millions and billions of years, leading to the formation of galaxies interspersed by vast, nearly empty expanses of intergalactic space. "Cosmological structures formed in this way will have predictable properties and are not fully random," Chin said.

Chin controls the atoms in his experimental chamber by trapping them in the crossing pattern of infrared laser beams. These optical lattices hold ultracold atoms fast, like eggs in an egg crate, Chin said. In the second phase of his research program, Chin will attempt to develop these optical lattices to store and transmit information between large numbers of atoms.

In the world of computation, smaller is better. Quantum computers, if fully developed, would be far more powerful than conventional computers because they would use atoms instead of transistors as their basic components.

"There are many more tricks we can play on these atoms than on eggs or on any tangible object," Chin said. These tricks, or "quantum operations," as scientists call them, could make it possible to tackle tasks with quantum computers that would otherwise prove impossible.

In particular, optical lattices can provide a way of maintaining a state of quantum coherence. In this state, all atoms are moving, spinning and tipping in perfect synchronicity. "Think about setting a bunch of eggs to spin in sync. It is not an easy task!" Chin said. 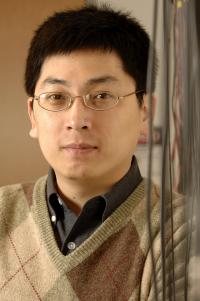