Durham, N.C., U.S. and Melbourne, Australia -- A team of Duke University Medical Center and Australian scientists has found that addictive drugs may have hijacked the same nerve cells and connections in the brain that serve a powerful, ancient instinct: the appetite for salt.

Their rodent research shows how certain genes are regulated in a part of the brain that controls the equilibrium of salt, water, energy, reproduction and other rhythms – the hypothalamus. The scientists found that the gene patterns activated by stimulating an instinctive behavior, salt appetite, were the same groups of genes regulated by cocaine or opiate (such as heroin) addiction.

"We were surprised and gratified to see that blocking addiction-related pathways could powerfully interfere with sodium appetite," said co-lead author Wolfgang Liedtke, M.D., Ph.D., an Assistant Professor of Medicine and Neurobiology at Duke University. "Our findings have profound and far-reaching medical implications, and could lead to a new understanding of addictions and the detrimental consequences when obesity-generating foods are overloaded with sodium."

The study was published in the Proceedings of the National Academy of Sciences early edition online on July 11.

"Though instincts like salt appetite are basically genetic neural programs, they may be substantially changed by learning and cognition," said co-lead author Professor Derek Denton, of the University of Melbourne and the Florey Neuroscience Institute, who is renowned for his pioneering work in the field of instinctive behavior. "Once the genetic program is operating, experiences that are part of the execution of the program become embodied in the overall patterns of an individual's behavior, and some scientists have theorized that drug addiction may use nerve pathways of instinct. In this study, we have demonstrated that one classic instinct, the hunger for salt, is providing neural organization that subserves addiction to opiates and cocaine."

Deeply embedded pathways of an ancient instinct may explain why addiction treatment with the chief objective of abstinence is so difficult, said Denton. Liedtke said that this might be relevant given the appreciable success of maintenance approaches that don't involve abstinence, like replacing heroin with methadone and cigarettes with nicotine gum or patches.

The study was the first to examine gene regulation in the hypothalamus for salt appetite. The team used two techniques to induce the instinctive behavior in mice – they withheld salt for a while combined with a diuretic and they also used the stress hormone ACTH to increase salt needs.

Liedtke, who is also affiliated with the Duke Center for Translational Neuroscience and the Duke Pain Clinics, said the researchers were surprised that they could detect that genes were "turned on" or "turned off" in salt appetite, these patterns were often substantially reversed within ten minutes of the animals' drinking salt solution, well before any significant salt could be absorbed from the gut into the bloodstream. The question of how this occurs is perplexing, and opens an entirely new field for exploration, Liedtke said.

In terms of survival advantage of this behavior, fast satisfaction of salt appetite makes sense. Among wild animals, the ability to rapidly compensate for salt need by avidly lapping a salty solution means that depleted animals can drink to gratification and leave quickly, reducing their vulnerability to predators.

The Duke-Melbourne research team found that when the animal harbors a robust sodium appetite, a certain region of the hypothalamus seems to become susceptible to the effects of dopamine, which is the brain's internal currency for reward. That suggests that the state of the instinctive need, the sodium-depleted state, "spring-loads" the hypothalamus for the subjective experience of reward which follows when animals gratify the need – a satisfied feeling. This concept is substantiated by their finding that the local actions of dopamine on a sub-region of the hypothalamus are critical for the animals' instinctive behavior.

A classic instinct -- salt appetite -- is linked to drug addiction 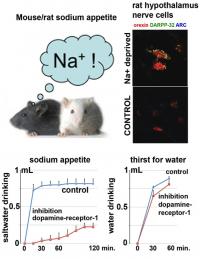