Daejeon, Republic of Korea, July 7, 2015--Mobile devices, such as smartphones and laptops, have become indispensable portable items in modern life, but one big challenge remains to fully enjoying these devices: keeping their batteries charged.

A group of researchers at KAIST has developed a wireless-power transfer (WPT) technology that allows mobile devices to be charged at any location and in any direction, even if the devices are away from the power source, just as Wi-Fi works for Internet connections. With this technology, so long as mobile users stay in a designated area where the charging is available, e.g., the Wi-Power zone, the device, without being tethered to a charger, will pick up power automatically, as needed.

The research team led by Professor Chun T. Rim of the Nuclear and Quantum Engineering Department at KAIST has made great strides in WPT development. Their WPT system is capable of charging multiple mobile devices concurrently and with unprecedented freedom in any direction, even while holding the devices in midair or a half meter away from the power source, which is a transmitter. The research result was published in the June 2015 on-line issue of IEEE Transactions on Power Electronics, which is entitled "Six Degrees of Freedom Mobile Inductive Power Transfer by Crossed Dipole Tx (Transmitter) and Rx (Receiver) Coils."

Professor Rim's team has successfully showcased the technology on July 7, 2015 at a lab on KAIST's campus. They used high-frequency magnetic materials in a dipole coil structure to build a thin, flat transmitter (Tx) system shaped in a rectangle with a size of 1m2. Either 30 smartphones with a power capacity of one watt each or 5 laptops with 2.4 watts each can be simultaneously and wirelessly charged at a 50 cm distance from the transmitter with six degrees of freedom, regardless of the devices' three-axes positions and directions. This means that the device can receive power all around the transmitter in three-dimensional space. The maximum power transfer efficiency for the laptops was 34%. The researchers said that to fabricate plane Tx and Rx coils with the six-degree-of-freedom characteristic was a bottleneck of WPT for mobile applications.

The research team used the Dipole Coil Resonance System (DCRS) to induce magnetic fields, which was developed by the team in 2014 for inductive power transfer over an extended distance. The DCRS is composed of two (transmitting and receiving) magnetic dipole coils, placed in parallel, with each coil having a ferrite core and connected with a resonant capacitor. Comparing to a conventional loop coil, the dipole coil is very compact and has a less dimension. Therefore, a crossed dipole structure has 2-dimension rather than 3-dimension of a crossed loop coil structure. The DCRS has a great advantage to transfer power even when the resonance frequency changes in the range of 1% (Q factor is below 100). The ferrite cores are optimally designed to reduce the core volume by half, and their ability to transfer power is nearly unaffected by human bodies or surrounding metal objects, making DCRS ideal to transmit wireless power in emergency situations. In a test conducted in 2014, Professor Rim succeeded in transferring 209 watts of power wirelessly to the distance of five meters. (See KAIST's press release on DCRS for details: http://www.eurekalert.org/pub_releases/2014-04/tkai-wpt041714.php)

The research team rearranged the two dipole coils from a parallel position to cross them in order to generate rotating magnetic fields, which was embedded in the Tx's flat platform. This has made it possible for mobile devices to receive power from any direction.

Although wireless-power technology has been applied to smartphones, it could not offer any substantial advantages over traditional wired charging because the devices still require close contact with the transmitter, a charging pad. To use the devices freely and safely, including in public spaces, the WPT technology should provide mobile users with six degrees of freedom at a distance. Until now, all wireless-charging technologies have had difficulties with the problem of short charging distance, mostly less than 10 cm, as well as charging conditions that the devices should be placed in a fixed position. For example, the Galaxy S6 could only be charged wirelessly in a fixed position, having one degree of freedom. The degree of freedom represents mobile devices' freedom of movement in three-dimensional space.

In addition, the DCRS works at a low magnetic field environment. Based on the magnetic flux shielding technology developed by the research team, the level of magnetic flux is below the safety level of the International Commission on Non-Ionizing Radiation Protection (ICNIRP) guideline (27µT) for general public exposure to electromagnetic field (EMF).

Professor Rim said, "Our transmitter system is safe for humans and compatible with other electronic devices. We have solved three major issues of short charging distance, the dependence on charging directions, and plane coil structures of both Tx and Rx, which have blocked the commercialization of WPT."

Currently, the research team and KAIST's spin-off company, TESLAS, Inc., have been conducting pilot projects to apply DCRS in various places such as cafes and offices. 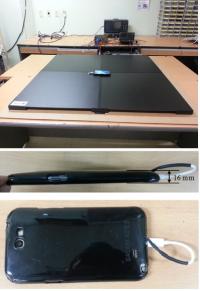