How vegetation phenology on the Tibetan Plateau (TP), the earth's largest surface area above 4000 m ASL, responds to climate change, in particular to rising temperatures, has attracted much attention in recent years. An increase in growth activity of high-elevation vegetation on the TP may have a considerable impact on the regional carbon budget.

One widely used method for vegetation phenology is collection of satellite remote sensing data. However, divergent results from analysis of remote sensing results have been obtained regarding the rate of change in spring phenology and its relation to climatic drivers on the TP.

Furthermore, satellite remote sensing records only cover the last 30 years, thus significantly limiting the statistical confidence we can place in such methods of trend detection. A dataset that covers a much longer period is needed to resolve current disagreements.

Recently, a research group headed by Prof. YANG Bao from the Key Laboratory of Desert and Desertification, Northwest Institute of Eco-Environment and Resources of the Chinese Academy of Sciences, together with coauthors from Russia, Germany, Canada and Sweden, has reconciled these conflicting results based on a 55-year series of vegetation phenology for the TP derived from well-validated process-based Vaganov-Shashkin model (V-S) simulations of tree-ring growth data.

The results have been published in the journal PNAS in an article entitled "New Perspective on Spring Vegetation Phenology and Global Climate Change Based on Tibetan Plateau Tree-ring Data."

No significant changes in SOS or EOS were observed from 1960-1981. April-June and August-September minimum temperatures are the main climatic drivers for SOS and EOS, respectively. An increase of 1°C in the April-June minimum temperature shifted the dates of xylem phenology by 6-7 days, lengthening the period of tree-ring formation.

This approach could be extended to other forested regions of the world. Scaling up the analysis would provide additional information on phenological responses of terrestrial ecosystems to ongoing climate change across the Northern Hemisphere.

This research was financially supported by the National Natural Science Foundation of China and the Alexander von Humboldt Foundation. 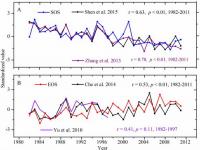