(Santa Barbara, Calif.) –– A supernova discovered Wednesday is closer to Earth ––approximately 21 million light years away –– than any other of its kind in a generation. Astronomers believe they caught the supernova within hours of its explosion –– a rare feat for events of this type.

The discovery of a supernova so early in its life, and so close to Earth has energized the astronomical community. Scientists around the world are scrambling to observe it with as many telescopes as possible, including the Hubble Space Telescope, and telescopes from the UC Santa Barbara-affiliated Las Cumbres Observatory Global Telescope Network (LCOGT).

Andy Howell, adjunct professor of physics at UCSB and staff scientist at LCOGT, is one of the leaders of the team that discovered the supernova. Howell said: "We caught this supernova earlier than we've ever discovered a supernova of this type. On Tuesday, it wasn't there. Then, on Wednesday, boom! There it was –– caught within hours of the explosion. As soon as I saw the discovery image I knew we were onto something big."

The supernova, dubbed PTF 11kly, occurred in the Pinwheel Galaxy, located in the "Big Dipper," also known as Ursa Major. It was discovered by the Palomar Transient Factory (PTF) survey, which is designed to observe and uncover astronomical events as they happen.

Such supernovae reach the brightness of more than a billion suns in the first three weeks after the explosion, because the process creates energetic radioactive elements that decay and emit light, according to Howell. They normally can't be seen so soon after the explosion because they are too faint. The relative closeness of this event was one factor that led to the unprecedented early observations. The other factor is the use of robotic telescopes. The PTF survey uses automated telescopes to scan the sky nightly and alert observers when something has changed. Robotic telescopes at LCOGT then allow immediate follow-up observations.

LCOGT is building a network of robotic telescopes around the world. The first three are active in Hawaii, Australia, and at the Sedgwick Reserve, near Santa Ynez, Calif. New images of the supernova from Wednesday night –– taken by the Hawaii and Sedgwick telescopes –– showed the supernova had brightened by more than a factor of 20 less than a day after discovery.

"PTF 11kly is getting brighter by the minute," said Peter Nugent, the senior scientist at Berkeley Lab who first spotted the supernova. Nugent is also an adjunct professor of astronomy at UC Berkeley.

"Type Ia supernovae are the kind we use to measure the expansion of the universe. Seeing one explode so close by allows us to study these events in unprecedented detail," said Mark Sullivan, the Oxford University team leader who was among the first to follow up on this detection.

The team put in an urgent request to activate the Hubble Space Telescope on Wednesday. The telescope's schedule is set weeks in advance, but was interrupted to insert regular observations of the new supernova starting Saturday. This will allow the team to probe the physics and chemistry of the explosion.

Catching supernovae so early allows a rare glimpse at the outer layers of the supernova, which contain hints about what kind of star exploded. "When you catch them this early, mixed in with the explosion you can actually see unburned bits from the star that exploded: It is remarkable," said Howell. "We are finding new clues to solving the mystery of the origin of these supernovae that has perplexed us for 70 years. Despite looking at thousands of supernovae, I've never seen anything like this before."

He calls the stars that explode as Type Ia supernovae "zombie" stars because they're dead, with a core of ash, but they come back to life by sucking matter from a companion star. Over the past 50 years, astrophysicists have discovered that Type Ia supernovae are part of binary systems –– two stars orbiting each other. The one that explodes is a white dwarf star. "That's what our sun will be at the end of its life," he said. "It will have the mass of the sun crammed into the size of the Earth."

The relative closeness of this supernova means that even amateur astronomers will be able to see it in the coming weeks. "The best time to see this exploding star will be just after evening twilight in the Northern hemisphere in a week or so," said Sullivan. "You'll need dark skies and a good pair of binoculars, although a small telescope would be even better."

The scientists in the PTF have discovered more than 1,000 supernovae since it started operating in 2008, but they believe this could be their most significant discovery. The last time a supernova of this sort occurred so close to Earth was in 1986, but Nugent notes that it was peculiar and heavily obscured by dust.

"Back then we didn't have modern instruments," noted Howell. "Now we have digital cameras, robotic telescopes, and all kinds of orbiting satellites that can see in x-rays, the ultraviolet, and visible light. We're going to have a field day."

UCSB scientists, telescopes help discover 'once in a generation' supernova 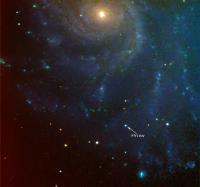 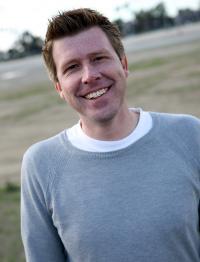