Infrared data from NASA's Aqua satellite have watched the strong thunderstorms in Typhoon Bopha fizzle and shrink in area over the weekend as wind shear increased. Bopha has now dissipated in the South China Sea, just west of Luzon, Philippines.

NASA's Aqua satellite has been providing data on Bopha since the day it formed on Nov. 26. In the storm's last days, Aqua's Atmospheric Infrared Sounder (AIRS) instrument captured infrared data of the storm and showed that cloud top temperatures warmed from Dec. 8 through Dec. 9 as cloud heights fell and thunderstorms lost their punch.

AIRS infrared data reveals where the coldest, highest cloud tops are located in a tropical cyclone. The coldest cloud tops indicate the strongest storms with the heaviest rain. On Dec. 8, AIRS data revealed a large area of strong thunderstorms surrounded the center of circulation as the storm skirted the west coast of Luzon, the northern Philippines. That same day, Bopha triggered more warnings for the Philippines.

By Dec. 9 at 0300 UTC (Dec. 8 at 10 p.m. EST/U.S.) the Joint Typhoon Warning Center issued its final advisory on Bopha. At that time it was a tropical depression located near 18.3 north latitude and 119.2 east longitude, about 240 miles north-northwest of Manila, Philippines. The depression was moving slowly at 3 knots (3.4 mph/5.5 kph) to the northeast and dissipating under adverse atmospheric conditions just west of Luzon.

On Dec. 9, AIRS data showed quite a different picture as the strongest thunderstorms no longer surrounded the center of circulation and were blown away from the center because of wind shear. The area of strong thunderstorms had also diminished greatly, indicating a weakening storm. Wind shear had taken its toll on this once deadly storm and had blown it apart. 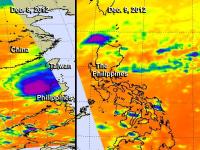