DURHAM, N.C. -- An international team of scientists led by Duke University researchers has uncovered key structural differences in the brains of parrots that may explain the birds' unparalleled ability to imitate sounds and human speech.

Reported June 24 in PLOS ONE, these brain structures had gone unrecognized in studies published over the last 34 years. The results also may lend insight into the neural mechanisms of human speech.

'This finding opens up a huge avenue of research in parrots, in trying to understand how parrots are processing the information necessary to copy novel sounds and what are the mechanisms that underlie imitation of human speech sounds,' said Mukta Chakraborty, a post-doctoral researcher in the lab of Erich Jarvis, an associate professor of neurobiology at Duke and a Howard Hughes Medical Institute Investigator.

Parrots are one of the few animals considered 'vocal learners,' meaning they can imitate sounds. Researchers have been trying to figure out why some bird species are better imitators than others. Besides differences in the sizes of particular brain regions, however, no other potential explanations have surfaced.

By examining gene expression patterns, the new study found that parrot brains are structured differently than the brains of songbirds and hummingbirds, which also exhibit vocal learning. In addition to having defined centers in the brain that control vocal learning called 'cores,' parrots have what the scientists call 'shells,' or outer rings, which are also involved in vocal learning.

The shells are relatively bigger in species of parrots that are well known for their ability to imitate human speech, the group found.

Until now, the budgerigar (common pet parakeet) was the only species of parrot whose brain had been probed for the mechanisms of vocal learning.

This team included researchers from Denmark and the Netherlands who donated precious brain tissue for the study. They characterized the brains of eight parrot species besides the budgerigar, including conures, cockatiels, lovebirds, two species of Amazon parrots, a blue and gold macaw, a kea and an African Grey parrot.

The researchers looked for specific gene markers that are known to have specialized activity in the brains of humans and song-learning birds.

They compared the resulting gene expression patterns in all the parrot brains with neural tracing experiments in budgerigars.

Even the most ancient of the parrot species they studied, the Kea of New Zealand, has a shell structure -- albeit rudimentary. This suggests that the populations of neurons in the shells probably arose at least 29 million years ago.

Before now, some scientists had assumed that the regions surrounding the cores had nothing to do with vocal learning. In a 2000 study, Jarvis and Claudio Mello of Oregon Health & Science University concluded that the core and shell were actually one large structure. These differing views caused confusion about the sizes of the brain regions important for vocal learning. Jarvis teamed up with Steven Brauth from the University of Maryland and his former postdoctoral fellow Sarah Durand, to help reconcile this confusion.

'The first thing that surprised me when Mukta and I were looking at the new results is, 'Wow, how did I miss this all these years? How did everybody else miss this all these years?'' said Jarvis, who is also member of the Duke Institute for Brain Sciences. 'The surprise to me was more about human psychology and what we look for and how biased we are in what we look for. Once you see it, it's obvious. I have these brain sections from 15 years ago, and now I can see it.'

The new results support the group's hypothesis that in humans and other song-learning animals, the ability to imitate arose by brain pathway duplication. How such a copy-and-paste job could have happened is still unknown.

'How can you get a mirrored song system surrounding another one?' Jarvis asks. 'Each (vocal learning center) has a core and a shell in the parrot, suggesting that the whole pathway has been duplicated.'

Most of the bird's vocal learning brain regions are tucked into areas that also control movement. These areas in parrots also show some special patterns of gene expression, which the scientists speculate might explain why some parrots are also able to learn to dance to music.

'It takes significant brain power to process auditory information and produce the movements necessary for mimicking sounds of another species,' Chakraborty said. 'The question is, how specialized are these parrot brains, and in what ways? Is it just a select group of specialized genes, or is it some specific projections that we haven't discovered yet?'

The scientists are especially curious about whether the shells give parrots a greater ability to imitate human speech.

'If that's true, then we've answered a big question in our field that people have been wanting to know for many years,' Jarvis said.

This finding is a part of a much larger international effort to sequence the complete genomes of all 10,000 species of birds in the next five years, called the Bird 10K Project.

The research was supported by the Howard Hughes Medical Institute and the National Institutes of Health (DP1 OD000448). Additional support came from the University of Copenhagen, Framework Grants from the Danish Council for Independent Research, and the Copenhagen Zoo.

Other authors on the study include Solveig Walløe and Torben Dabelsteen of the Department of Biology, University of Copenhagen in Denmark; Signe Nedergaard, now of the National Centre of Forensic Services in Vanloese, Denmark; Emma Fridel of Duke; Bente Pakkenberg of Bispebjerg University Hospital in Copenhagen, Denmark; Mads Bertelsen of the Copenhagen Zoo in Frederiksberg, Denmark; Gerry Dorrestein of the Dutch Research Institute of Avian and Exotic Animals in Veldhoven, The Netherlands; Steven Brauth of University of Maryland, College Park; and Sarah Durand of LaGuardia Community College in New York.

Study hints at why parrots are great vocal imitators 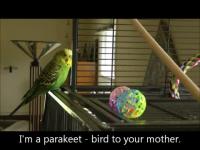