For decades, researchers have studied the interior of the Earth using seismic waves from earthquakes. Now a recent study, led by Arizona State University's School of Earth and Space Exploration Associate Professor Dan Shim, has re-created in the laboratory the conditions found deep in the Earth, and used this to discover an important property of the dominant mineral in Earth's mantle, a region lying far below our feet.

Shim and his research team combined X-ray techniques in the synchrotron radiation facility at the U.S. Department of Energy's National Labs and atomic resolution electron microscopy at ASU to determine what causes unusual flow patterns in rocks that lie 600 miles and more deep within the Earth. Their results have been published in the Proceedings of the National Academy of Sciences.

Planet Earth is built of layers. These include the crust at the surface, the mantle and the core. Heat from the core drives a slow churning motion of the mantle's solid silicate rocks, like slow-boiling fudge on a stove burner. This conveyor-belt motion causes the crust's tectonic plates at the surface to jostle against each other, a process that has continued for at least half of Earth's 4.5 billion-year history.

Shim's team focused on a puzzling part of this cycle: Why does the churning pattern abruptly slow at depths of about 600 to 900 miles below the surface?

"Recent geophysical studies have suggested that the pattern changes because the mantle rocks flow less easily at that depth," Shim said. "But why? Does the rock composition change there? Or do rocks suddenly become more viscous at that depth and pressure? No one knows."

To investigate the question in the lab, Shim's team studied bridgmanite, an iron-containing mineral that previous work has shown is the dominant component in the mantle.

"We discovered that changes occur in bridgmanite at the pressures expected for 1,000 to 1,500 km depths," Shim said. "These changes can cause an increase in bridgmanite's viscosity -- its resistance to flow."

The team synthesized samples of bridgmanite in the laboratory and subjected them to the high-pressure conditions found at different depths in the mantle.

Mineral key to the mantle

The experiments showed the team that, above a depth of 1,000 kilometers and below a depth of 1,700 km, bridgmanite contains nearly equal amounts of oxidized and reduced forms of iron. But at pressures found between those two depths, bridgmanite undergoes chemical changes that end up significantly lowering the concentration of iron it contains.

The process starts with driving oxidized iron out of the bridgmanite. The oxidized iron then consumes the small amounts of metallic iron that are scattered through the mantle like poppy seeds in a cake. This reaction removes the metallic iron and results in making more reduced iron in the critical layer.

Where does the reduced iron go? The answer, said Shim's team, is that it goes into another mineral present in the mantle, ferropericlase, which is chemically prone to absorbing reduced iron.

"Thus the bridgmanite in the deep layer ends up with less iron," explained Shim, noting that this is the key to why this layer behaves the way it does.

"As it loses iron, bridgmanite becomes more viscous," Shim said. "This can explain the seismic observations of slowed mantle flow at that depth." 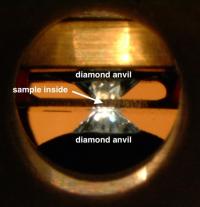