CHAPEL HILL, NC - For decades, scientists have thought the bacteria that cause the bubonic plague hijack host cells at the site of a fleabite and are then taken to the lymph nodes, where the bacteria multiply and trigger severe disease. But UNC School of Medicine researchers discovered that this accepted theory is off base. The bacteria do not use host cells; they traffic to lymph nodes on their own and not in great numbers.

In fact, most of the plague-causing bacteria - called Yersinia pestis - get trapped in a bottleneck either in the skin, while en route to the lymph node, or in the node itself. Only a few microbes break free to infect the lymph node and cause disease.

"Anytime you find something where the host is winning, you want to exploit it," said Virginia Miller, PhD, professor of microbiology and immunology and senior author of the paper in PLoS Pathogens. "If we can understand how the host and the bacteria contribute to this bottleneck, then this could become something we'd target so we could either ramp up what's causing the bottleneck or slow down the infection."

The discovery offers much needed information about how virulent insect-borne diseases, such as plague, malaria, and dengue virus cause infection. The findings also present new routes for research on how bacterial strains cause disease despite the immune system's best efforts.

The plague, which killed millions of people during the Middle Ages, is contracted by several people each year in the western United States. Outbreaks have occurred in the recent past in India and Africa, and one is unfolding right now in Madagascar. Standard antibiotics are effective against Y. pestis if taken early enough. But infection can go undetected for days, making diagnosis difficult and antibiotics less effective the longer the bacteria take root.

Miller's team studies the pneumonic and bubonic versions. Three years ago, Rodrigo Gonzalez, PhD - a UNC graduate student at the time and now a postdoctoral fellow at Harvard - searched the scientific literature for data confirming the accepted notion that Y. pestis gets trafficked by human phagocytic cells from the fleabite site to the lymph nodes. Scientists readily accepted this idea because when Y. pestis microbes are added to phagocytic cells in culture, the cells do soak up the bacteria.

Phagocytes essentially eat harmful microbes, and because these cells traffic through the lymphatic system, scientists came to the logical conclusion that phagocytes take the Y. pestis to the lymph nodes.

Gonzales spent months developing an accurate way to mimic the flea bite in the lab so that the proper amount of bacteria would get transferred into the skin of mice. Then Miller's team created 10 special DNA sequences and added them to the chromosome of Y. pestis to generate 10 different strains. This did not affect virulence of the bacteria but allowed Miller's team to tag the microbes so that the researchers could identify which bacteria traveled from the "bite site" to the lymph nodes.

"We found that only one or two of the 10 bacteria made it to the lymph node," Miller said. "But they got there fast - within five or ten minutes after the bacteria were introduced. We know that if a bacterium is traveling in a host cell, it would not move that fast because host cells are slow; they kind of crawl through the lymphatic system instead of flowing through fluid like bacteria can."

Miller's team is currently conducting experiments to figure out how most of the bacteria are prevented from infecting the lymph node.

"We may have found a point of vulnerability," Miller said. "Exploiting it could lead to new ways to defeat Yersinia pestis and other insect-borne pathogens."

The National Institutes of Health and the Robert D. Watkins Fellowship from American Society for Microbiology funded this research. 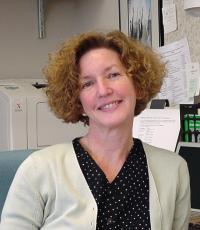