In a matter of months, butterflies sporting the yellow and red wing color pattern of a wild species were created through simple laboratory crosses of two other wild species, researchers report in the June 15, 2006 edition of the journal Nature.

"We recreated the evolutionary steps that may have given rise to Heliconius heurippa, a hybrid butterfly species, in the lab," explains Jesus Mavarez, Molecular Evolution Fellow at the Smithsonian Tropical Research Institute.

Sexual encounters between species resulting in hybrid offspring may be common in nature. However, homoploid hybrid species -- fully sexual hybrid species resulting from crosses between two different parent species -- are still considered to be quite rare. In Ragoletis fruit flies, Swordtail fishes and African Cichlids there is growing evidence for homoploid hybrid speciation. This report of the laboratory creation of a hybrid butterfly nearly identical to a known wild species, and the observation that hybrid individuals don't mate with either parent species, provides the most convincing case to-date for homoploid hybrid speciation in animals.

Co-author Mauricio Linares (University of the Andes, Colombia) had long suspected that H. heurippa, boasting red and yellow wing stripes, could be a hybrid species resulting from a cross between H. cydno and H. melpomene. He set up a long term research project to test this idea. Linares, with his students Camilo Salazar and Christian Salcedo, designed and performed a series of crosses between H. cydno and H. melpomene. The result was a homoploid sexual hybrid very similar to H. heurippa.

"We found that a wing pattern almost identical to that of the hybrid can be obtained in months-- just 3 generations of lab crosses between H. cydno and H. melpomene! Moreover, natural hybrids from San Cristobal, Venezuela, show wing patterns very similar to H. heurippa, further supporting the idea of a hybrid origin for this species," Mavarez explains.

Butterflies in the genus Heliconius (~60 species) exhibit a tremendous diversity of brightly coloured wing patterns. Strikingly beautiful red, orange, yellow and white markings on black wings clearly signal to birds and other predators that the butterflies are toxic.

The wing pattern signalling system is so finely tuned that butterflies with even slight deviations in color pattern -- confusing signals-- suffer from higher predation. Non-toxic butterfly species may copy common wing patterns from this group in order to take advantage of the predator's learned avoidance response (a process known as mimicry). Color patterns also serve as mating cues; these butterflies are extremely choosey about finding mates with their own, species or race-specific, wing pattern. For Heliconius, color is everything.

Heliconius heurippa males choose females with red and yellow stripes. They don't choose females of their parent species (H. cydno and H. melpomene) because these species have only a yellow or a red stripe, respectively. "If you cover the red or the yellow stripe of a bicoloured hybrid female, hybrid males no longer find her the least bit attractive," continues Mavarez, who documented the genetic relationships between the three species at the Smithsonian molecular biology laboratories in Panama.

The "weird" wing pattern of H. heurippa individuals makes them undesirable as mates for members of their parents' species, but attractive to each other -- and that's almost all it takes for speciation to occur.

The process of speciation usually occurs when one species splits into two, but there are some cases in which new species result from the mating between two good species. Wait a minute, you may be saying, isn't the definition of a species is that it can only produce viable offspring with members of its own species?

Yes, but. Usually when members of different species mate, their offspring die or are infertile. On occasion, polyploid hybrids -- individuals with multiple copies of their parents' chromosomes, survive and establish a new lineage or species. Polyploid hybrid speciation often occurs in plants when polyploid individuals go on to reproduce asexually. Some lizards, frogs, fish and many invertebrates also pull this trick.

But hybrid matings may also produce normal, sexual offspring with the same number of chromosomes as their parents (homoploids). These offspring don't usually go on to become new species, because they backcross with individuals from their parent species.

At least two other species in the group, H. timareta and H. pachinus, are also proposed to result from H. cydno/H. melpomene hybridization. "We will feel very fortunate if there are more hybrid species in this group," Mavarez continues, "Cases of hybrid animal species are extremely rare and you're very lucky to have one in your preferred group. So, imagine our excitement about the possibility of finding several hybrid species in Heliconius! A whole new set of questions could be addressed." A new research project to identify the specific genetic contribution of each parental species to the genome of H. heurippa promises to shed new light on this kind of hybrid speciation.

The Smithsonian Tropical Research Institute (STRI), a unit of the Smithsonian Institution, headquartered in Panama City, Panama, furthers our understanding of tropical nature and its importance to human welfare, trains students to conduct research in the tropics and promotes conservation by increasing public awareness of the beauty and importance of tropical ecosystems. www.stri.org 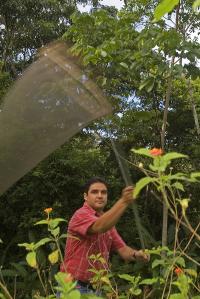