In the arms race between predators and prey, each evolves more and more sophisticated ways of catching or escaping from the other. Rachel Page, staff scientist at the Smithsonian Tropical Research Institute and Ximena Bernal, associate professor at Purdue University, review in Functional Ecology how bats use both private and social information to attack their prey.

"Bats are an exciting group to study because they have evolved so many different hunting strategies," said Page. "In this review, we look broadly across bats worldwide to investigate the patterns and processes underlying the sensory and cognitive adaptations bats have evolved to successfully hunt their prey."

Bats hunting in open spaces, high above the forest or over water, depend primarily on their echolocation systems. When they receive an echo from a prey, they produce more and more frequent signals--producing what is called a feeding buzz--as they go in for the kill. In contrast, bats that hunt in more enclosed, cluttered spaces often cannot use echolocation alone to find their prey. The echoes that bounce off vegetation are difficult to distinguish from the echoes of the prey. These bats are very good at listening for sounds emitted by prey.

Bats from New Zealand, which forage up to 40% of the time hunting on the forest floor, listen for movement and use their sense of smell to detect prey in the leaf litter. Vampire bats are able to recognize the sounds of a specific individual's breathing pattern, returning to feed on the same blood night after night. Desert-dwelling long-eared bats listen for the sounds made by scorpions as they move through the environment, and use these sounds to pinpoint their prey.

"Searching for prey takes a lot of time and energy, but one of the amazing things that bats do to minimize search effort is to eavesdrop on prey as they communicate--and also to eavesdrop on other bats to find out where they are catching prey," said Bernal.

Bats observe other bats as they hunt, paying special attention to locations where bats are making feeding buzzes, indicating abundant patches of prey. Bats tend to have hearing abilities that match their hunting strategies. Bats relying purely on echolocation to find food tend to emit loud, far-reaching echolocation calls and have smaller ears, while gleaners have large ears, lower-frequency hearing and produce quieter echolocation calls. No matter which hunting strategy they use or where they hunt, bats seem to be adept at learning from one another. Not only do they learn from their own species, they also learn from other bat species.

"We are puzzled as we look at bat family trees to see where different hunting strategies have arisen as bats evolve," said Page. "If so many bat species have low-frequency hearing and can thus detect prey mating signals, and these mating signals are excellent beacons of high density prey patches, why aren't more bat species taking advantage of these loud, conspicuous signals?"

"Despite the fact that bats are an excellent group to learn about the sensory adaptations of predators, the vast majority of bats are poorly studied," said Bernal. "Perhaps more research will help us to understand how predation strategies evolved. These are the questions that will drive new generations of students to keep looking for answers."

Bats use private and social information as they hunt 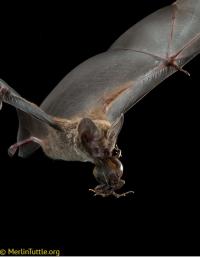 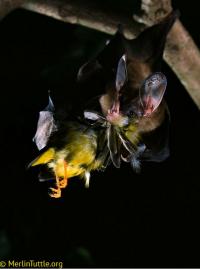