Male seed beetles with genital structures that injure females may have greater reproductive success. As new research from Uppsala University shows, females that mate with such males benefit, in the sense that their offspring are healthier. This new piece of the puzzle will help scientists to understand how complex mating interactions between males and females have developedevolved. The study is published in Proceedings of the Royal Society B.

"This helps us understand is connected with the evolutionary dance between males and females of all animal species, and the resulting differences between them - sexual dimorphism - that we observe. It's important to understand this evolutionary dance that we're all caught up in. We can show that this intricate process is influenced and governed by several different processes at the same time," says Göran Arnqvist, Professor of Animal Ecology at Uppsala University's Department of Ecology and Genetics.

The evolved mechanisms behind successful mating interactions between the sexes are complicated, and have developed throughout evolution. In insects, for example, it is not uncommon for males to have developed spiny reproductive organs that confer greater success in reproduction but simultaneously inflict harm on the females' reproductive tract in the course of mating.

In their study, the researchers bred various strains of the seed beetle (Callosobruchus maculatus). In some strains the males had mating organs with large spines, while in others thhese spines were small. When the male beetles were then mated with females, it turned out that the males with the longest thorns spines also had the greatest success with the opposite sex, despite the females suffering severe injuries during the mating. Despite these injuries, however, the females also benefited from mating with these males since their offspring, male and female alike, apparently became more viable. The existence of a genetic link between big spines and good genes was demonstrated by the fact that the sisters of the males with the longest spines were in better health than other females .

The researchers also investigated what happened if the spines were peeled off the mating organs by means of a microlaser. The males' ability to mate then deteriorated, which indicates that the number of young a male beetle can produce is not solely dependent on his genes.

"Our experiments indicate that the females do pay a high price for mating with successful males -getting injured - but also that the females simultaneously obtain genetic advantages for their offspring. Our results provide support for a more nuanced view of mating interactions in the animal world, where behaviours can be shaped by several effects, and seemingly different evolutionary forces, at the same time," Arnqvist says.

Male beetles' spiny genitalia both harmful and beneficial to females 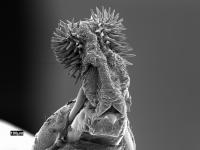