Deep below the ocean's surface are hydrothermal vent fields, or submarine hot springs that can reach temperatures of up to 400 °C. These fields are surrounded by a unique set of animals, including vent crabs and eyeless vent shrimp, that survive off of the chemicals emitted from the hydrothermal vents. Recently, Okinawa Institute of Science and Technology Graduate University (OIST) researchers and collaborators have computed the dispersal of larvae from these hydrothermal vent ecosystems to understand and safeguard the animals found there. The results have been published in Proceedings of the National Academy of Sciences (PNAS).

"We are trying to understand how these western Pacific vent fields are connected," Prof. Satoshi Mitarai, first author and principal investigator of OIST's Marine Biophysics Unit said. "And we want to know how the creatures are migrating from one site to another, as well as how they are evolving."

Another goal of this research is to protect the native vent species from deep-sea mining, a process that retrieves metals from the ocean floor that could negatively affect the animals living near these hydrothermal vents.

In order to understand and protect these animals, the researchers quantified larval dispersal because the larval stage is the only time these creatures can freely move through the ocean via the currents. To do this, they calculated the average depth at which the larvae would travel, which is 1000 meters, and the average time at which vent animals would stay in the larval stage at this depth, which is 83 days. Then, they deployed 10 deep-ocean profiling floats every other month for two years, with the help of the Japan Coast Guard, in the Hatoma Knoll, off the coast of Ishigaki Island in southern Okinawa. They programmed the floats to stay at 1,000 m and drift along with the ocean's current. The floats surfaced every 30 days to transmit their location.

"This is the first time we could see how deep ocean circulation processes potentially transport materials from hydrothermal vents," Mitarai said.

In addition, the scientists used cutting-edge ocean models to quantify larval dispersal on a larger scale with simulated 'model' floats. By combining the data from the ocean models and from the deep-ocean profiling floats experiments, the researchers are able to "estimate what is possible and what is not possible for larval dispersal," Mitarai said.

The data can help to predict where larvae will travel over the course of the larval stage and even show that larvae could be transported over long distances to far off vent fields. The ability to see where larvae is potentially going is important for understanding gene flows - movement from one population to another - in these vent species.

"We have provided concrete background information that population geneticists can use to set up their hypotheses to understand gene flows," Mitarai said.

It is also important for estimating the evolutionary processes of these creatures and for protection against deep-sea mining. "This information can help marine ecologists to design optimum plans to protect these areas from deep ocean mining," Mitarai said.

Map of Larval Dispersal in the Western Pacific Ocean 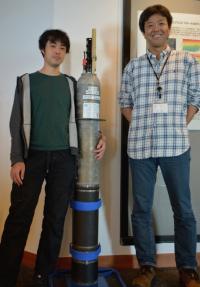