The team of scientists was led by Mathieu Le Tacon and Bernhard Keimer from the Max-Planck-Institute for Solid State Research in Stuttgart (Germany) and comprised scientists from Politecnico di Milano (Italy), Karlsruhe Institute of Technology (KIT) and the European Synchrotron (ESRF) in Grenoble, France.

High-temperature superconductivity was discovered nearly thirty years ago and is beginning to find more and more practical applications. These materials have fascinated scientists since their discovery. For even more practical applications, the origin of their amazing properties must be understood, and ways found to calculate the critical temperature. A key element of this understanding is the process that makes electrons combine into so-called "Cooper pairs" when the material is cooled below the critical temperature. In classical superconductors, these Cooper pairs are formed thanks to electron-phonon coupling, an interaction between electrons carrying the electrical current and collective vibrations of atoms in the material.

To understand the role this interaction plays in high-temperature superconductors, Matthieu Le Tacon and his colleagues took up the challenge to study these atomic vibrations as the material was cooled down below its critical temperature. "Studying electron-phonon coupling in these superconductors is always a delicate task, due to the complex structure of the materials," says Alexeï Bosak, an ESRF scientist and member of the team. He adds: "This is why we developed a two-level approach to literally find a needle in the hay stack".

The big surprise came once the electron-phonon coupling had been probed. "In terms of its amplitude, the coupling is actually by far the biggest ever observed in a superconductor, but it occurs in a very narrow region of phonon wavelengths and at a very low energy of vibration of the atoms", adds Mathieu Le Tacon. "This explains why nobody could see it before the two-level approach of X-ray scattering was developed".

Because the electron-phonon coupling is in such a narrow wavelength region, it cannot "help" two electrons to bind themselves together into a Cooper pair. The next step will be to make systematic observations in many other high-temperature superconductors. "Although we now know that electron-phonon coupling does not contribute to their superconductivity, the unexpected size of the effect—we call it giant electron-phonon-coupling—happens to be a valuable tool to study the interplay between superconductivity and other competing processes. This will hopefully provide further insight into the origin of high-temperature superconductivity, still one of the big mysteries of science", concludes Mathieu Le Tacon. 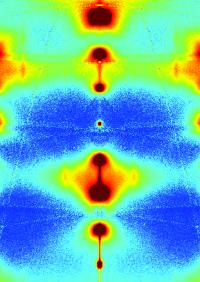