The volume of discarded electronics in East and Southeast Asia jumped almost two-thirds between 2010 and 2015, and e-waste generation is growing fast in both total volume and per capita measures, new UN research shows.

Driven by rising incomes and high demand for new gadgets and appliances, the average increase in e-waste across all 12 countries and areas analyzed -- Cambodia, China, Hong Kong, Indonesia, Japan, Malaysia, Philippines, Singapore, South Korea, Taiwan, Thailand and Vietnam -- was 63% in the five years ending in 2015 and totalled 12.3 million tonnes, a weight 2.4 times that of the Great Pyramid of Giza.

The first Regional E-waste Monitor: East and Southeast Asia, (in full, from January 15: http://bit.ly/2i8Q9X2) was compiled by the UN's think tank, the United Nations University, through its Sustainable Cycles (SCYCLE) Programme and funded by the Japanese Ministry of Environment.

There were large differences between nations on the per capita scales, with Cambodia (1.10 kg), Vietnam (1.34 kg) and the Philippines (1.35 kg) the lowest e-waste generators per capita in 2015.

The report uniquely presents a summary of the regional e-waste statuses, and it is arranged to allow direct comparisons where possible that can help further the development of e-waste management systems and policies based on other countries' experiences.

"For many countries that already lack infrastructure for environmentally sound e-waste management, the increasing volumes are a cause for concern," says co-author Ruediger Kuehr of UN University. "Increasing the burden on existing waste collection and treatment systems results in flows towards environmentally unsound recycling and disposal."

The report warns of improper and illegal e-waste dumping prevalent in most countries in the study, irrespective of national e-waste legislation.

Consumers, dismantlers and recyclers are often guilty of illegal dumping, particularly of "open dumping", where non- functional parts and residues from dismantling and treatment operations are released into the environment.

Studies in the region show that the main reasons are:

The report also points to common practices such as open burning, which can cause acute and chronic ill-effects on public health and the environment.

Though less common, spontaneous combustion sometimes occurs at open dumping sites when components such as batteries trigger fires due to short circuits.

Informal recycling, also called "backyard recycling," is a challenge for most developing countries in the region, with a large and burgeoning business of conducting unlicensed and often illegal recycling practices from the backyard.

These processes are not only hazardous for the recyclers, their communities and the environment, but they are also inefficient, as they are unable to extract the full value of the processed products.

Typically, informal recyclers use solvents such as sulphuric acid (for copper) or aqua regia (for gold). The leachate solutions go through separation and purification processes to concentrate the valuable metals and separate impurities. This often results in the release of toxic fumes.

"Open burning and acid bath recycling in the informal sector have serious negative impacts on processers' occupational health," Shunichi Honda co-author of this study warns. "In the absence of protective materials such as gloves, glasses, masks, etc., inhalation of and exposure to hazardous chemicals and substances directly affect workers' health."

Adds co-author Deepali Sinha Khetriwal, Associate Programme Officer, UN University: "Indirect exposure to these hazardous substances is also a cause of many health issues, particularly for families of informal recyclers who often live and work in the same location, as well as for communities living in and around the area of informal recycling sites."

According to the report, Japan, South Korea and Taiwan have a head-start in the region in establishing e-waste collection and recycling systems, having begun in the late nineties to adopt and enforce e-waste specific legislations. This was built in large part on experience in solid waste management. Among the most advanced economies and areas in Asia, the three are also characterised by high per capita e-waste generation, formal collection and recycling infrastructure and relatively strong enforcement.

Hong Kong and Singapore, meanwhile, do not have specific e-waste legislation. Instead, the governments collaborate with producers to manage e-waste through a public-private partnership. As small island nations with large shipping and trade networks, both countries have significant transboundary movements of e-waste generated domestically, as well as in transit from other countries.

China, the Philippines, Malaysia and Vietnam all have recent e-waste legislation. The four countries are therefore in a transitionary phase, with a mix of formal and informal elements in an evolving eco-system in terms of collection and recycling infrastructure. The countries face similar challenges in enforcing regulations with limited resources and capacity and low public awareness regarding the hazards of improper disposal of e-waste.

Cambodia, Indonesia and Thailand have yet to establish legal frameworks for e-waste management. However, there is an active informal sector in these countries with an established network for collection and import of end-of-life products and their recycling, particularly repair, refurbishment and parts harvesting.

The increase is particularly striking given the drop in EEE sales in Europe and the Americas in 2012 following the global financial crisis.

Asia as a whole accounts for the majority of EEE sales and generates the highest volume of e-waste, estimated at 16 million tonnes in 2014. However, on a per-capita basis, this amounts to only to 3.7 kg per inhabitant, as compared to Europe and the Americas, which generate nearly four times as much per capita -- 15.6 kg per inhabitant.

With growing incomes, consumers in Asia now replace their gadgets more frequently. In addition, many products are designed for low-cost production, but not necessarily repair, refurbishment or easy recycling.

Despite these formal steps, enforcement of these measures remains a significant challenge in these countries and many others around the globe.

UNU is an autonomous organ of the UN General Assembly dedicated to generating and transferring knowledge and strengthening capacities relevant to global issues of human security, development, and welfare. The University operates through a worldwide network of research and training centres and programmes, coordinated by UNU Centre in Tokyo. 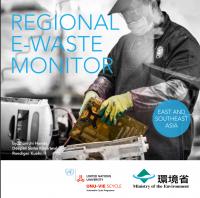